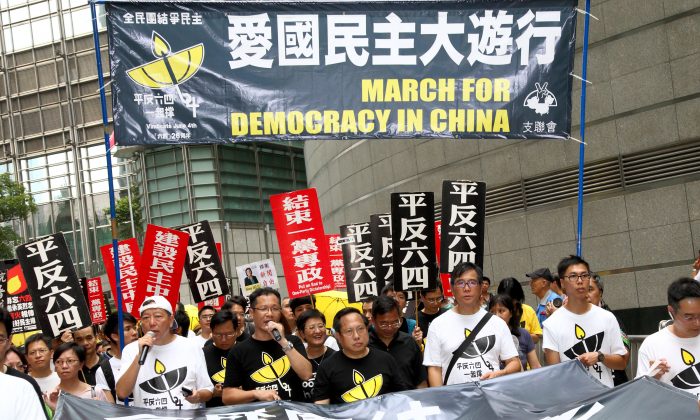 3,000 Hongkongers take to the street to commemorate the 26th anniversary of Tiananmen Square Massacre and to protest for democracy and human rights on May 31, 2015. (Epoch Times)
HK Current Affairs

HONG KONG—Thousands marched through Hong Kong streets on May 31 to commemorate the 26th anniversary of the June 4, 1989 Tiananmen Square Massacre and to protest for democracy and human rights.

The march was held by the Hong Kong Alliance in Support of Patriotic Democratic Movements of China. The president and vice president of the Alliance held a giant theme banner while leading the procession, which began at 3pm.

Besides the traditional banners reading “Vindicate June 4” and “End One-Party Dictatorship and Return Political Power to the People,” there were also yellow umbrellas, yellow ribbons, and banners related to the Umbrella Movement for democracy, as well as requests for human right activists in mainland China to be set free. Many pan-democratic members of the Hong Kong Legislative Council also participated in the march.

The procession chanted slogans such as “Vindicate June 4!” and “Leung Chun-ying, step down!” This refers to Hong Kong’s unpopular Chief Executive Leung Chun-ying.

The Hong Kong Federation of Students and many student unions decided not to join the event, but many college students still came, most of whom have participated in the Umbrella Movement.

Dozens of members of the Hong Kong Federation of Social Work Students, an organization formed by students who major in social work in Hong Kong universities, took to the street.

An 18-year-old member, Mr. Sin, said that in 26 years the Chinese Communist Party (CCP) has never admitted to its crime of killing. He hopes history will not be forgotten.

“In fact, everybody should learn about the massacre, as Hong Kong is part of China,” Sin said.

He added that there are certain similarities between the June 4, 1989 movement and the Umbrella Movement.

“Students’ movements account for a large portion of social movements,” Sin said. “This is why we frequently refer to the June 4 movement to evaluate the current social movements. We need to inherit this spirit of student movements, which is fearless enough to confront the powers and courageous enough to speak out for Hong Kong.”

High school students from Scholarism also participated in the march. Scholarism convener Joshua Wong said that the June 4 movement is Hong Kong’s political watershed “which contributed to writing the Basic Law or the controversy that formed a significant future problem in Hong Kong.”

“So the June 4 movement is closely related to Hong Kong’s democratic development,” Wong said. “We feel the need to seek accountability for the massacre by the CCP. And as we endure suppression from the Chinese Communist regime, both Hongkongers and mainlanders need to stand up and fight.”

Retired teacher Mr. Cheung held a banner with the slogan “Aiming at the Regime.” He said with a sense of humor that he used to teach at a leftist school, helping the CCP brainwash the students. Later he found out he had been fooled.

Cheung believes that many Hong Kong people are still deceived by the CCP. He said the so-called “one person, one vote” policy is specious, and Hong Kong people must realize that the constitutional package is a fake election.

Cheung described the CCP as a “Taliban-style” regime.

“We want to overthrow it. The Russian Communist Party could be overthrown, because if communism were valid, then the CCP would not be the only remaining regime of its kind. The whole world has witnessed it,” Cheung said.

Mr. Leung, a participant with a yellow ribbon tied on his head, said that people fled to Hong Kong years ago just to escape the Communist Party, and now it’s time to oppose the CCP.

Albert Ho Chun-yan, president of the Hong Kong Alliance in Support of Patriotic Democratic Movements, announced that about 3,000 people joined the march.

“After 25 years, there are still so many people taking to the street, which really impressed us,” Ho said. “We see that Hong Kong people are still passionate and determined to fight to vindicate the June 4 democratic movement, to seek justice for the victims of the Tiananmen Square Massacre, and to pursue democracy in Hong Kong. We also hope that the mainland Chinese people can also enjoy democracy and freedom.”

Ho said that now is the opportunity to fight for true universal suffrage and bring the hope of democracy to mainland China. He urged the public to join the candlelight vigil on the evening of June 4.

“Like last year, we will have 100,000 or 150,000 or more people in attendance. Victoria Park will be jam-packed with people with candlelight to show our conscience, to shout words of conscience to the Beijing authorities, and to let them know that Hongkongers speak not only for the few million Hong Kong citizens, but also for the hundreds of millions of people in mainland China.”