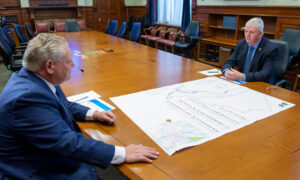 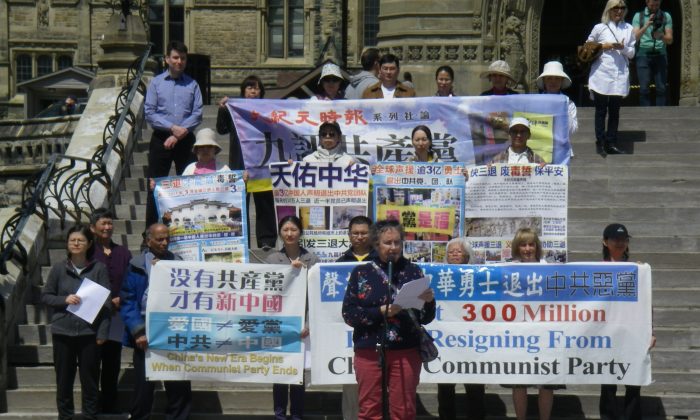 Supporters of the rapidly growing Tuidang movement, in which Chinese people worldwide are renouncing their ties to the Chinese Communist Party (CCP), gather on Parliament Hill in Ottawa on May 6, 2018, to mark the milestone reached in March 2018 of 300 million Chinese people having quit the CCP and its affiliated youth organizations. (The Epoch Times)
Canada

The great wave of Chinese people quitting the Communist Party indicates that this foreign ideology that has killed tens of millions of people in China is certain to meet its demise, says a global centre dedicated to helping people recognize the destructive character of communism and to withdraw from the Party.

“Since coming to China from the West, the Communist Party has not only caused the death of 80 million people under its tyranny, but has also used violence to destroy the traditional cultural and spiritual foundation that humankind has relied on for its existence since ancient times,” said Shin Qihua in a statement read at an event in Ottawa on May 6 organized by the Tuidang Centre, a U.S.-based non-profit whose English name is the Global Service Centre for Quitting the Chinese Communist Party (CCP).

“The three withdrawals indicate that the Chinese Communist Party is collapsing and a new era for the Chinese nation is certain to arrive,” the statement noted.

Shin, a coordinator of the local Ottawa Tuidang Centre, was speaking at a rally on Parliament Hill, one of numerous events across Canada and worldwide marking the milestone of 300 million Chinese people having renounced their ties to the CCP and its affiliated organizations: the Young Pioneers and the Communist Youth League.

The Communist Youth League is a group for high school and university students and the Young Pioneers is a corresponding group for children aged 6 to 14. When they join they have to take a vow to dedicate their lives to the Party and the cause of communism.

‘There is no evil it will not commit’

At the rally, participants one after another spoke on the CCP’s ongoing history of killing and the importance of cutting ties with such an evil ideology and organization.

“When the Chinese raise their fists to make a vow to dedicate their whole lives to the cause of communism, they are binding themselves with the CCP. Yet Heaven is bound to punish the CCP, because there is no evil it will not commit. As a member, you will be implicated,” said 70-year-old Zhang Hailun.

Zhang has been a volunteer of the local Ottawa Tuidang Centre for nearly 10 years, coming to Parliament Hill rain or shine to talk to Chinese visitors from around the world and to advise them to quit their memberships in the CCP and affiliated organizations.

One speaker read an excerpt from the “Nine Commentaries on the Communist Party,” an editorial series published by The Epoch Times in 2004, which is notably the first time such a publication has been made accessible to the public providing a thorough and complete history of the CCP.

Many writings on communism focus on its history of killing and mass murder, such as Mao Zedong’s Great Leap Forward from 1958 to 1962, which led to more deaths than those under Adolf Hitler and Joseph Stalin. The “Nine Commentaries” goes further, explaining the sweeping tragedy of destruction of society’s morality under the Party and noting that this is the greatest danger facing humanity.

Shin said The Epoch Times has recently launched a new book called “The Ultimate Goal of Communism,” “to help people clearly understand the goal of communism, which is to ultimately destroy humanity by destroying morality in society and people’s belief in gods.”

As the book explains, destroying people’s morality is precisely how the CCP destroys people—by suppressing the good side of human nature so that people no longer believe the traditional Chinese principle that Heaven will ultimately reward good deeds and punish bad deeds.

The publication of the editorial series prompted the Tuidang movement that has since grown rapidly, reaching the 300-million mark on March 23. The movement led to the founding of the Tuidang Centre in New York in 2007.

A statement from the centre explained that Tuidang is not a political movement but rather private acts by individuals who have begun to think for themselves and awaken to their own conscience.

“Withdrawing from the Party is not about participating in politics. Neither is it about seizing power,” the statement said, noting that those who withdraw come from all walks of life, including officials from various levels of the CCP and government agencies.

“In their statement of withdrawal, they express the process of their inner changes and expose the CCP’s crimes based on their personal experience. People are spurning the CCP because they have seen through its evils and are unwilling to continue being deceived.”