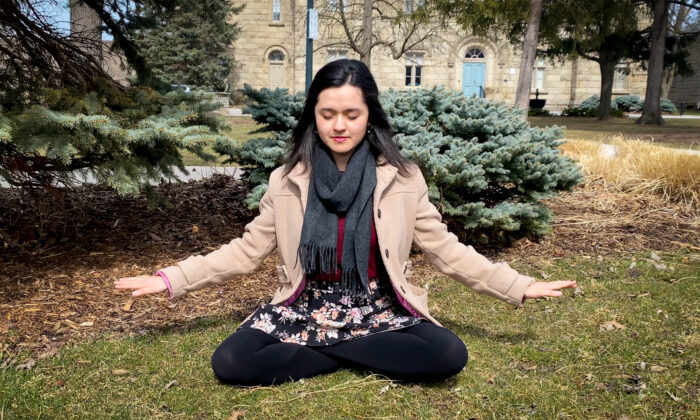 It was November 2020, nine months after then-22-year-old Carolina Avendano began living by herself and eight months after her city of Calgary, Canada, entered a lockdown that shut schools and most businesses. She was utterly alone. The pandemic restrictions meant she couldn’t visit her sister despite living in the same city.

The prolonged isolation caught Avendano in a crisis that she largely kept to herself. Outwardly, she was the model of productivity—living independently, working two tutoring jobs, volunteering online, while completing a double degree in math and education. But inside, she had never felt more lost and empty.

“I knew I was out of balance in every sense of the word,” Avendano told The Epoch Times. Her body was sending alarm bells: She was underweight, she suffered from an eating disorder and headaches, and her period hadn’t come for more than a year from no apparent cause. She said little about her struggles to her family, who anxiously noted that she was getting thinner even as she insisted they were exaggerating.

A turning point came on a rare trip outside when Avendano randomly walked into a café and glanced at the community board for yoga and meditation classes. There, a blue flyer showing a man meditating by the seaside caught her eye. Avendano had never heard about Falun Gong, a spiritual practice consisting of three core values—truthfulness, compassion, and tolerance—along with five slow-moving meditative exercises. But the online meditation workshop advertised on the flyer seemed to be exactly what she needed.

“What surprised me the most was that it was learned for free, by people from all walks of life,” she said, noting that she had seen yoga classes taught at over $1,000, a price she couldn’t afford. She registered for one session that weekend and kept practicing on her own.

The following Monday, she was surprised to find that her period had returned.

“I was excited. And I was scared,” she said. “I’m like, whoa, I don’t want to think it’s a coincidence. But it seems incredible.”

Avendano’s experience bears some resemblance to that of many who took up the practice in China in the 1990s when Falun Gong, also known as Falun Dafa, was spreading by word of mouth.

The spiritual discipline’s meditative exercises and teachings, rooted in traditional Chinese beliefs including Buddhist and Daoist ideas, seemed to resonate with a population that had been stripped of its traditional beliefs and culture during the upheaval of the Cultural Revolution launched by the Chinese Communist Party a few decades earlier.

On May 13, 1992, Li Hongzhi, founder of the practice, introduced Falun Gong to his hometown of Changchun, an industrial city and the capital of Jilin Province in China’s northeastern corner.

In November of that year, 28 years before Avendano’s encounter with the practice, 36-year-old health care worker Mi Ruijing was one of around 400 who went to a series of talks in Beijing in which Li taught the meditative exercises and explained the practice’s moral teachings.

The class lasted for 10 days, and Mi felt a change from day one. On the way home, “it was as if I wasn’t walking but stepping on clouds,” said Mi, who now resides in the United States. “It was very light, very comfortable.”

But Mi was even more appreciative of the changes she was experiencing on the inside. Previously, she had read many books about Daoism in search of the meaning of life.

She said the class brought answers to questions she’d been asking for years. She felt an excitement as if she had long been shut in a dark room and was suddenly freed and allowed to see the light.

“I felt that I hadn’t actually lived for all these years and was really starting my life,” she said.

During the next two years, Li would hold dozens more classes in China’s major cities, the largest ones attended by around 6,000, according to records compiled by Minghui.org, a U.S.-based clearinghouse for Falun Gong-related information. Mi attended more than 20 of them. By 1999, around 70 million to 100 million Chinese had taken up the practice, according to estimates at the time. Many were drawn to the discipline after seeing the physical and psychological improvements it brought to others they knew.

Mi remembers vividly a moment when a friend accidentally burned three holes in Mi’s new outfit while helping to iron it. Mi was on the verge of lashing out before she checked herself. Instead, she told the woman that the garment could be repaired and that she needn’t worry.

It was a small exercise of putting others first, Mi said, among many more that she and others would apply daily in keeping with the practice’s teachings.

“If it was I who did it and someone chided me, how would I feel?” she said.

Changing for the Better

In the summer of 1993, Liu Yan, an engineer in Beijing, waited for two hours for a ticket for Li’s class after hearing about it from a friend.

The classes were already becoming so popular that tickets were sold out months in advance. But when Liu called the hosting organization, a public university, she learned that tickets were still available. She took a day off from work, went to the university office an hour early, and was the first in line to snap up three tickets.

After attending the class, she discarded various other spiritual books she had at home. “I couldn’t put it into words, but I knew that Falun Gong was the best,” Liu, who now resides in the United States, told The Epoch Times, adding that the practice’s tenets of truthfulness, compassion, and tolerance had made a strong impression on her.

Liu, who had a quick temper, credited the practice for making her a better wife and bringing an immense boost to her health. The bone spurs around her waist went away, and every year, her co-workers marveled at the clean health record she got during her workplace’s annual health checks. Her parents joined her, too. For Liu’s mother, already in her 70s, her high blood pressure and throat cancer disappeared after she took up the practice, Liu said.

Nearly 1 in 13 Chinese people would experience an abrupt turn in their lives by the end of the decade, when the Chinese Communist Party initiated an elaborate campaign seeking to crush their faith after perceiving Falun Gong’s popularity as a threat to its authoritarian rule. The persecution has resulted in millions of adherents being sent to detention facilities, where they’re subjected to torture, forced labor, and forced organ harvesting.

Mi and Liu were both forced out of their workplaces and received jail sentences of two and four years, respectively, for refusing to renounce their faith. They were both emaciated by the time of their release. Both of Liu’s parents passed away while she was in prison, and she wasn’t able to be with them in their final moments.

In one so-called transformation center, designed to coerce adherents into renouncing their beliefs, Liu was so brutally beaten on her legs by a wooden mop handle that blisters the size of her palms swelled up on her lower legs, and her inner thighs turned purple-black. The swelling kept increasing for days, despite a machine applied to her body to siphon out the pus. She ended up having to have surgery to treat her wounds. Two scars from the surgery remain.

During her first imprisonment in a labor camp, Liu’s physical appearance changed so much that her husband, when finally allowed a visit, had to ask the guard standing by to confirm that the emaciated woman in front of him was his wife.

Mi developed scabies and stomach perforation while in detention. Three-quarters of her stomach had to be removed as a result. At the end of her term, Mi was literally “skin and bones,” she said.

It was through the recent movie “Finding Courage” that Avendano, who had begun reading more about Falun Gong and had joined a meditation group in downtown Calgary, caught a glimpse of the ongoing brutality in China. The courage and strength displayed by those incarcerated inspired her, she said.

Since taking up the practice, Avendano said, she now strives to be a better daughter to her parents, both of whom suffer from depression.

“I saw everything as an opportunity to bring up my character, and I learned that I have to treat everybody with kindness,” she said.

The online workshop she participated in during the pandemic was initiated by a group of volunteers, including Alexander Meltser, owner of an e-commerce business based in Florida and a practitioner of Falun Gong for over two decades. “If you cannot go outside, go inside,” Meltser said.

The webinar offers a private experience, with a host presenting slideshows followed by videos demonstrating the exercises. The host also responds to questions directly on a live chat box.

The volunteers piloted the online classes in India and Russia in February 2020, as countries around the world began issuing lockdown orders. Encouraged by the number of registrants, the team started to launch globally. Their website now displays in 20 languages, and more than 30,000 people in 45 countries have participated in at least one session.

The team now has 100 volunteers. Avendano is among them, brainstorming ideas to streamline the online experience for the attendees.

“What I value the most about the practice is that it’s open for everybody,” she said, noting that the Falun Gong teachings are available in Spanish, her first language.

“I think just the power of sharing such a beautiful practice with everybody at no cost, that really says a lot to [people].”

Joseph Gigliotti, a chiropractor who hosted the workshop that Avendano first attended, told Insight: “This is a project where we can directly share with people the benefits that we’ve gotten from Falun Gong.

“Our mindset was, hey, there’s people at home doing nothing. They’re stuck at home, they can’t go outside. There’s a lot of mental health issues. People are really struggling, and they feel disconnected. This is just something that they can do to help them on their inner life.”

At the very end of the class, Gigliotti always asks if everyone got what they were coming for.

“It’s one of my favorite parts of the webinars, to see how people answer that question. Because they’re very, very excited. They’re very happy,” he said. “A lot of people say, ‘I will continue on this journey.’”

For him, the principles espoused by the practice helped lift a “dark cloud of anxiety and depression” that had hung over his head for years.

He has been with the practice for eight years, he said, adding that those have been “the most fulfilling years of my life.”