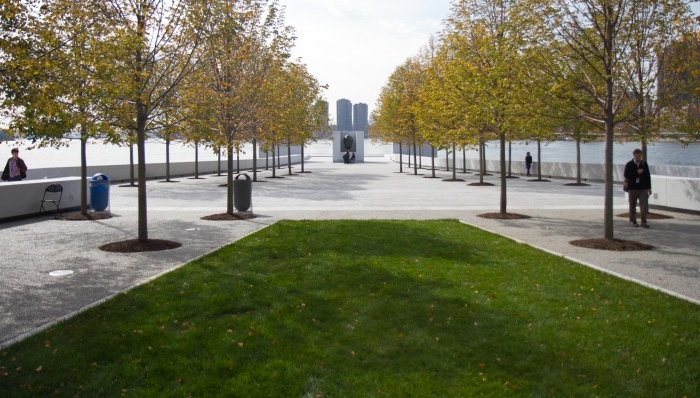 The family of Ambassador William vandal Heuvel (3rd from Right in Front row) at the dedication ceremony for the opening of the Franklin D. Roosevelt Four Freedoms Park on Roosevelt Island. (Benjamin Chasteen/The Epoch Times)
US

The memorial celebrated the 40-yearlong period it took to finally realize a memorial for U.S.’s 32nd and longest standing president. Designed by architect Louis Kahn in the early 1970s, the park gets its name from Roosevelt’s 1941 State of the Union Address, during World War II. President Roosevelt listed four freedoms now found carved into the white granite of the memorial, including freedom of speech, freedom of worship, freedom from want, and freedom from fear.

With the construction of One World Trade Center in the background as Clinton made his delivery, the gathering was reminded of the continuing fear of terrorism that plagues the world. On the same day of the dedication, the FBI intercepted a 21-year-old Bangladeshi man attempting to blow up the New York Federal Reserve Bank.

The project was inspired in 1973 by then New York Governor Nelson Rockefeller and former Mayor John Lindsay. Former U.S. Ambassador to the U.N. William vanden Heuvel was there when the idea of the Four Freedoms Park was hatched in 1973. For the past 10 years, he has been the driving force behind fulfilling the goal.

“It takes a long time, and it’s appropriate … if they survive history, you know, Roosevelt has been dead now for what almost 65 years, it certainly does show his presence, that’s worthy of a memorial,” said vanden Heuvel.

To give perspective, the Lincoln memorial was dedicated in 1922, 57 years after former President Abraham Lincoln was assassinated.

Gov. Rockefeller became the vice president, the architect Louis Kahn dropped dead in Penn Station, the city went into bankruptcy, and the park was put on hold.

The abrupt stairs lead the eyes to look skyward before the angled rows of trees on either side direct sight to the central focus in the distance, Roosevelt’s 1,050-pound bronze bust. The angled arrangement also provides an optical illusion, where the bust seems further away than it is and when leaving seams closer than it really is.

Walking toward the bust, there’s time to contemplate the ideals imbued in the memorial.

“There’s no more a fitting home for it than in the shadow of the United Nations that FDR conceived, a stone through away from the Navy yard that he oversaw… looking out on the sea that he loved and the city that he did so much to build,” Gov. Cuomo said.

The bust holds a commanding presence and is central to the park. FDR’s grandson, who carries his name a FDR III said that the D.C. monument, while it is a good reflection of FDR, does not depict him accurately. He believes the new bust is more accurate. It captures the seriousness of the time.

“It captures his strength and courage,” FDR III said. “The thing that really defined him was his smile,” he said, not just weathering the era but also keeping positive.