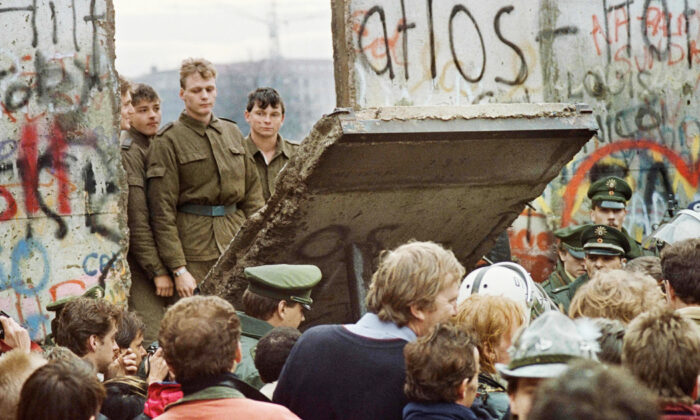 West Berliners crowd in front of the Berlin Wall early Nov. 11, 1989, as they watch East German border guards demolishing a section of the wall. (Gerard Malie/AFP via Getty Images)
Viewpoints

30 Years After Fall of Berlin Wall, Let’s Tear Down Wall of Dogma That Thwarts Our Liberty 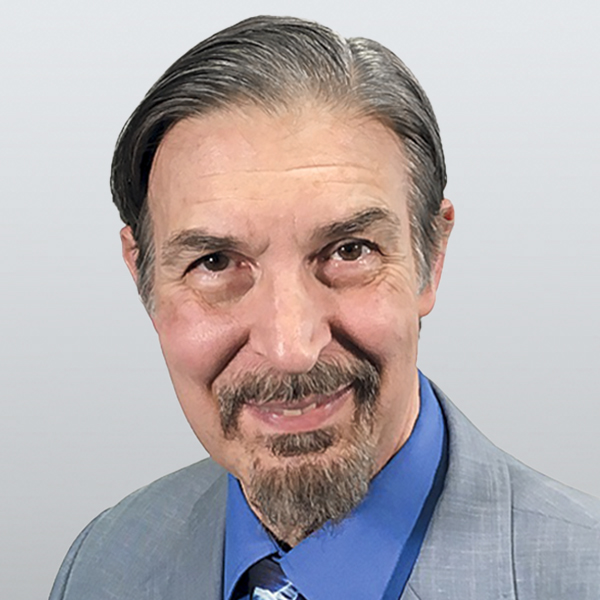 On Nov. 9, 1989, the Berlin Wall fell as thousands of East Berliners celebrated their liberation from the giant communist prison camp.

Today, 36 percent of American millennials say they approve of communism, and 70 percent say they are likely to vote for socialism—the economic regime that impoverished all communist-ruled countries.

After World War II, the United States, Great Britain, and France created the Federal Republic of Germany in the zones they occupied, replacing Nazi totalitarianism with democracy and personal and economic liberty. The Soviet Union, meanwhile, created in its zone the so-called German Democratic Republic, where it imposed communist totalitarianism.

Berlin, located 100 miles inside East Germany, also was divided into East and West zones. East Berliners naturally wanted to live free and prosper, but that posed a problem for the Soviets. By 1961, thousands of East Berliners were moving each day into West Berlin. To halt the mass exodus, the communists of East Berlin built a wall to contain their subjects.

In 1981, I took the closed military train through East Germany to West Berlin. Armed communist guards along the track ensured no one took photos out the windows of the desolate countryside. In the center of Berlin, there was a double wall, with a “no man’s land” in between with guard towers, machine guns, and anti-tank barricades to keep the vassals of communism from fleeing.

Along the Western side of the wall, there were crosses marking the places where East Germans trying to escape had been gunned down in the no man’s land. In other parts of the city, where the barrier separating East from West was narrow, separated parents and children, relatives, and lifelong friends could stand and wave at one another from their sides of the wall, though they could never touch, hold hands, kiss, or enjoy lives with one another because of the cruelty of communism.

With my U.S. passport, I could enter East Berlin by going through the military Checkpoint Charlie. The East side was sterile, with few stores, nothing to buy, and bullet holes from World War II still visible in the buildings. After a few hours, I did what the prisoners in the East couldn’t do. I returned to the free side of Berlin.

The communists kept a close watch on their people, spying on them, eavesdropping on their conversations, and censoring dissenters. Those not loyal enough to the regime would be deprived of what little economic well-being they might have had. Under socialism, government elites determine who gets what; those who challenge the regime are imprisoned and tortured.

The communists censored information and tried to indoctrinate their subjects about how much better the East was than the West. In Berlin, the dogma didn’t work. East Berliners could see the bright lights of Kurfürstendamm, the boulevard of restaurants, well-stocked shops, and exciting nightlife in the West—all denied to them by their overlords.

In 1963, President John F. Kennedy famously stood before the wall and declared, “Ich bin ein Berliner”—“I am a Berliner”—in solidarity with the city. In 1987, President Ronald Reagan challenged Soviet leader Mikhail Gorbachev to “tear down this wall!”

The Soviet bloc finally collapsed because its socialist system of government control simply didn’t work. It led to economic distortions, privations, and corruption. So how is it that today, Democrat presidential candidates openly declare themselves socialists and advocate the policies that so dramatically failed in the Soviet bloc? How could Sen. Bernie Sanders (I-Vt.), who honeymooned in the Soviet Union the year before the Berlin Wall and the system that built it collapsed, attract huge crowds, rather than the contempt and derision he deserves? And how can young people have favorable opinions of the system and the era?

Universities today are now dominated by rabid, anti-liberty apparatchiks who’ve indoctrinated a generation now in leadership positions in media, entertainment, politics, civic groups, religion, corporate boards, charities, and, of course, education. Many campuses censor those who dissent from leftist orthodoxy. Young people have been left in ignorance of the horrible history of communism. Through propaganda, both soft and hardcore, leftists have created a generation that cheers Sanders and Sen. Elizabeth Warren (D-Mass.).

Leftists have erected a Berlin Wall in the minds of young people, imprisoning them in dogma. Libertarians, conservatives, liberals, and anyone who values liberty and prosperity should unite to “tear down this wall.” We should take the 30th anniversary of the fall of the Berlin Wall to remember, to think, to understand, and to fight for the values that define the civilized West.

Edward Hudgins (ehudgins@heartland.org) is research director at The Heartland Institute. He worked on policies to help countries throw off their communist and socialist systems.