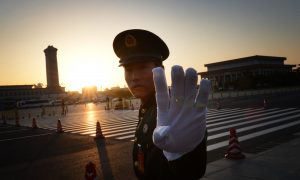 Letter to an American in China: Where is the Berlin Wall Today?
0
Share Now
TelegramFacebookTweetEmailTellMeWeReddit
Copy Link 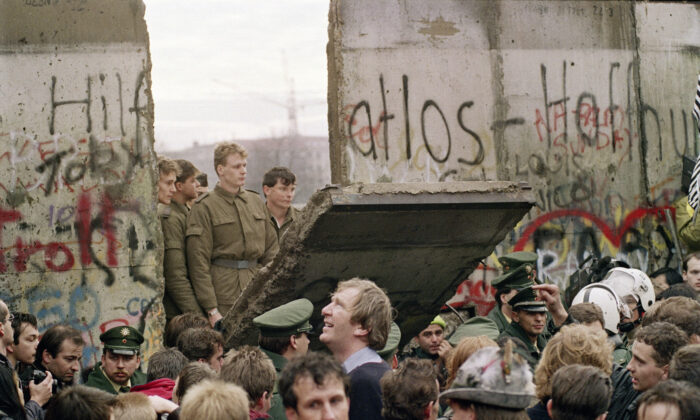 West Berliners crowd in front of the Berlin Wall early Nov. 11, 1989, as they watch East German border guards demolishing a section of the wall. (Gerard Malie/AFP via Getty Images)
International

30 Years After Collapse of Berlin Wall, Polish ‘Solidarity’ Co-founder Has Strong Warning to the Free World

Nov. 9 marks the 30th anniversary of the fall of the Berlin Wall, which led to the unification of West and East Germany under NATO.

The symbol of the Iron Curtain divided the world into two blocs: the free world and the communist bloc, and was dismantled by a spontaneous act of the people living in East Germany, ruled at that time by a communist regime.

On Nov. 9, 1989, the East German communist regime, facing civil unrest, decided to loosen its travel regulations prohibiting travel between East and West Germany, effective the next day. The decision was announced at a press conference held on the same day by a spokesman for the Communist Politburo, Günter Schabowski.

Due to a miscommunication, as Schabowski was not involved in the discussions and the decision making, he erroneously answered a reporter’s question about when the new regulations would take effect. Schabowski said, “Immediately, right away.”

The news was broadcast that evening on TV in West Germany and East Germany, which encouraged East Germans to rush to the Wall and demand the border guards immediately open the gates. The disoriented and overwhelmed guards tried to contact their superiors for instructions, but crowd consisting of thousands of people demanded to be let through “as Schabowski said, we can.”

After about three hours, the guards yielded and let the crowd of East Germans through the gates with minimal or no identity check. After crossing the gates, they were greeted cheerfully by West Germans who also gathered on their side of the Wall to celebrate. West Berliners jumped on the top of the Wall and were immediately joined by East Berlin youth.

Why Was Berlin Wall Built

The Berlin Wall was built on Aug. 13, 1961, to prevent the constant flow of refugees from East Germany to West Berlin in their attempt to seek better living conditions and freedom in the Western free world. West Berlin was a free world enclave in communist-ruled East Germany, and for many who sought asylum in the West, was the easiest way to reach the free world. Berliners on both sides could easily cross the border in Berlin in order to work, shop, visit relatives, and for entertainment, according to History.com.

In June 1961, the number of people who fled to West Berlin was 19,000. The number increased to 30,000 in July, and it kept increasing until the Wall was erected. This, along with stringent regulations on who could cross the border, dramatically reduced the number of defectors. However, living in the Eastern communist bloc made people so desperate that some even risked their lives in order to escape to the other side of the Iron Curtain.

History.com says that “at least 171 people were killed trying to get over, under, or around the Berlin Wall.”

“From 1961 until the wall came down in 1989, more than 5,000 East Germans (including some 600 border guards) managed to cross the border by jumping out of windows adjacent to the wall, climbing over the barbed wire, flying in hot air balloons, crawling through the sewers and driving through unfortified parts of the wall at high speeds.”

Eyewitness to Fall of Berlin Wall

Andrzej Gwiazda, a prominent anti-communist opposition leader, one of the founders and former Vice President of Solidarity, an independent Polish Trade Union that led Poland to the overthrow of communism, was in West Berlin on Nov. 9, 1989, and shared his experience with The Epoch Times. He knew through analyzing the development of the political situation in Europe and worldwide that the fall of the Berlin Wall was imminent, and was able to estimate its date with an accuracy of a few days. Gwiazda went to West Berlin four days before the fall of the Wall and waited there.

During these four days, every evening, Gwiazda went together with German oppositionists to the Wall. West Berliners were systematically chipping away pieces of the Wall, so when Gwiazda got there it was already chipped to a reinforcement point. He also chipped off pieces of the Wall and brought to Poland two bags of Wall pieces for his friends as “souvenirs.” People in Poland at that time enjoyed acquiring a piece of the Berlin Wall before its complete demolition.

On the evening of Nov. 9, Gwiazda joined the big crowd waiting on the West side of the Berlin Wall in front of Brandenburg Gate. When the wall crossing was opened, Gwiazda walked with the stream of people through the gate to East Berlin. “East Berliners were beside themselves with joy,” said Gwiazda.

“It was, after all, families, that had not been able to see each other for years. Friends, strangers, all celebrated, it was a grand fiesta there, and we, having no friends there, went to have beer,” added Gwiazda.

Why Did the Berlin Wall Fall?

Gwiazda also explained to The Epoch Times the factors and the sequence of events leading to the collapse of the Berlin Wall, as well as its consequences.

In 1986, during the Cold War era, General Secretary of the Soviet Communist Party Mikhail Gorbachev rejected Marx’s doctrine and established a new system in the Soviet Union called perestroika in Russian, meant to reform the country’s inefficient and oppressive economic and political system. The meaning of this term is “reconstructing” or “restructuring” or “transformation.” At the same time, Gorbachev also rejected the Brezhnev Doctrine of limited sovereignty, which justified the Soviet Union’s intervention in the affairs of the Eastern Bloc countries if “communist rule or Soviet domination” was compromised.

Gwiazda said that it was “was like a statutory permission to intervene in the [affairs of] countries of the Soviet bloc.” According to him, it meant that Poland de facto regained sovereignty but the implementation of this decision took three years.

The same held true for other Eastern Bloc countries. However, “It was not until 1989 that the entire bloc actually became independent of direct supervision, direct domination or direct control by Moscow,” said Gwiazda. “It became obvious that Germany would unite as a result of the system transformation.”

Communism Has Not Disappeared

While it is believed by some that the fall of the Berlin Wall marked the end of Communism, it turns out that Communism did not disappear with the disintegration of the communist bloc in Eastern Europe. Gwiazda said that “Communism was de facto rejected by communists. Communism has gone down in history, but communists remained in the highest positions and continued to manage [Poland] and other countries of the bloc.”

Gwiazda cited the history of the Polish Socialist Party (Polish acronym: PPS) to illustrate it. The Polish Socialist Party was established in 1892 based on the Marxist ideology. The only difference between the PPS and other communist or socialist parties was that the PPS advocated national liberation. “PPS and Western socialist parties turned out to be precursors of Communism,” Gwiazda said.

Shortly after communist rule was established in Poland, the PPS was absorbed by a communist party, called The Polish United Workers’ Party (PUWP).

According to Gwiazda, after the liquidation of Communism was announced by Gorbachev in 1986, “the PPS was reactivated in Poland.” The reactivated PPS obtained a certificate of its continuity from the PPS in exile in London and officially asked Socialist International to “unsuspend or wake-up” the Polish Socialist Party. PPS was suspended in Socialist International after Poland lost its independence due to World War II.

At that time, nobody knew about any plans to dissolve the Polish communist party.

On June 4, 1989 the PUWP lost the first partially free election in Poland. It dissolved in January 1990 on its 11th Congress. Its final First Secretary Mieczyslaw Rakowski said in his speech at the 11th Congress, “We adopted a resolution to dissolve the party [PUWP] … and today … by saying goodbye to her, I do not think that we put her in the coffin,” according to Pulse Biznesu.

Prof. Antoni Dudek wrote in his book “Regulated History. Decomposition of Communist Dictatorship in Poland 1988-1990,” that during the break in the Congress session, over 1,100 delegates created a new party Social Democracy of the Republic of Poland (SdRP) that inherited all assets of the dissolved PUWP.

A year later the new party joined Democratic Left Alliance (SLD), which was admitted to Socialist International in 1997 until its withdrawal in 2017.

“Usually, attention is given to the overnight transformation of the communist party into the social-democratic one. However, something else was more important. Overnight, thousands of officials, officers, judges, directors, and managers became independent officers of the Third Polish Republic. Formally, they no longer had dilemma about who to be loyal to, which of course does not mean that most of them have changed their political affinity,” Dudek wrote.