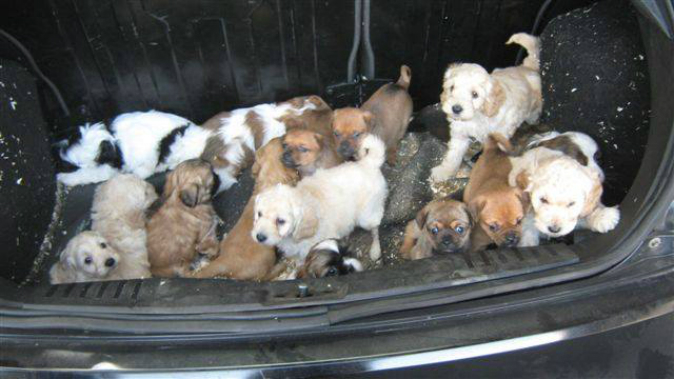 Ten puppies were rescued by the Scottish SPCA on June 27—intercepted from the illegal puppy trade. Earlier last month, 20 were rescued.

The puppies were being smuggled into Scotland to be sold on for a huge profit—they were picked up at the Cairnryan Ferry Port in Scotland.

The breeds were found crammed together and in horrible condition.

They included shih tzus, bichon frises, Cavalier King Charles spaniels, cocker spaniels, pugs, cavachons, and cockapoos. Each of the puppies can be sold for 800 pounds, which is a little over $1,000.

“Unfortunately the puppy trade is big business in Scotland, with thousands of dogs being brought into the country each year, from Northern Ireland and the Republic of Ireland in particular,” an undercover inspector with the Scottish SPCA said in a press release.

The puppies were transferred from the Belfast ferry port to the Irish SPCA (ISPCA).

“Thankfully, we were able to get these poor puppies signed over into the care of the ISPCA, who can now find them loving new homes,” the Scottish SPCA wrote on its website.

The Scottish SPCA said that they are investigating the illegal operation, and are working in partnership with a number of organizations and agencies “as part of the fight against those involved in the illegal dog trade industry.”

The 30 pups were examined by a veterinarian and are said to be doing well.