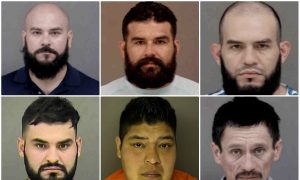 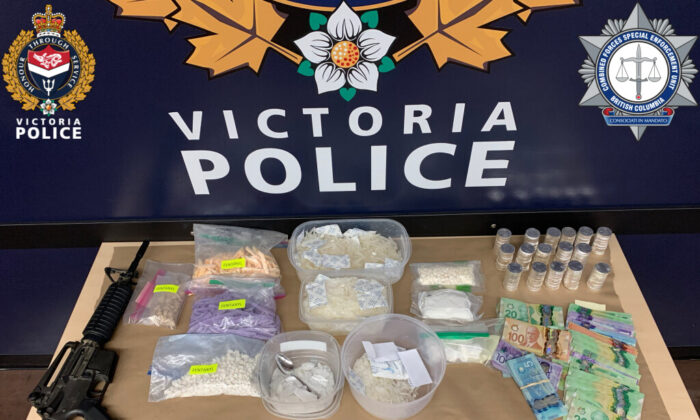 Replica assault rifle, fentanyl, other drugs, and cash that were seized in Operation Juliet in a file photo. (Victoria Police Handout)
Canada

$30 Million in Drugs, Cash, and Guns Seized in Victoria

More than 12 kilograms of high-concentrated fentanyl—enough to supply an estimated 3,965,000 lethal doses—were seized alongside other illegal drugs, firearms, and cash by police and special enforcement units in British Columbia.

Known as Project Juliet, the joint operation between Victoria Police Department’s (VicPD) Strike Force and the Combined Forces Special Enforcement Unit of BC (CFSEU-BC) spanned several months, has the seized approximately $30 million worth of illegal drugs including fentanyl, cocaine, and methamphetamine from an organized crime group in Victoria, the VicPD said in a statement on Wednesday.

In total, 20 firearms consisting of pistols, shotguns, and assault style rifles were seized in the operation. Officials said some of the rifles were modified to be fully automatic, and many of the firearms had their serial numbers removed from them.

During the five searches, officers uncovered over one kilogram of cocaine, more than 10 kilograms of high-concentration fentanyl, over four kilograms of methamphetamine, one kilogram of MDMA—commonly known as ecstasy—one kilogram of sildenafil—commonly referred to as Viagra—a replica assault rifle, nearly $400,000 in “bulk currency,” along with three luxury vehicles.

In addition, officers also seized two sets of body armour, two carbines, three shotguns, and seven pistols with a suppressor or “silencer,” roughly 1,000 rounds of ammunition and a variety of fake identification documents in the Lower Mainland.

“The provincial opioid crisis continues to affect people from all walks of life, across all socio-economic groups,” VicPD Chief Del Manak said. “It reaches into our high schools and our homes. The tremendous outcome of this joint project is just one step in the targeted enforcement of drug traffickers harming our communities.”