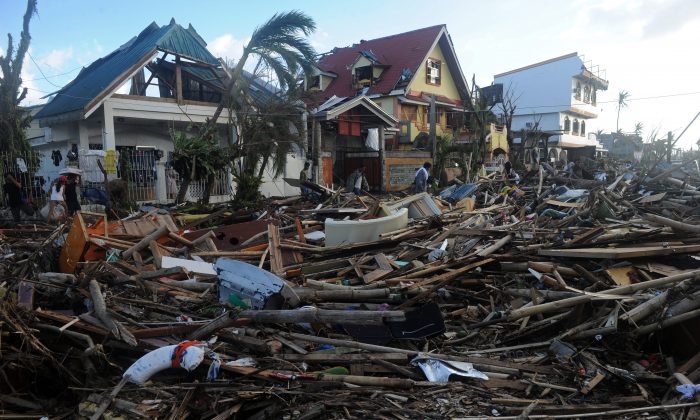 People walk among debris and destroyed houses in Palo, eastern island of Leyte on November 10, 2013, three days after devastating Super Typhoon Haiyan hit the area on November 8. The death toll from a super typhoon that decimated entire towns in the Philippines could soar well over 10,000, authorities warned on November 10, making it the country's worst recorded natural disaster. (Noel Celis/AFP/Getty Images)
Asia & Pacific

Some 30 members of the same family have gone missing after Typhoon Haiyan smashed through the central Philippines. A Hong Kong-based family member said that she hasn’t heard from them in days.

“It’s my uncle, my mom’s brother is missing. All his children, his wife, everyone. My cousin is missing with her six children, they range in age from 9 to 19. Then I have many, many other missing cousins. But these are the ones we’re the closest with — and they’re nowhere to be found,” Nemeth told the network.

Nemeth, who is six months’ pregnant, said she has not heard from them in three days  and now, she said her family is looking to hire a person to go to Tacloban to find them.

“If no one can or is even willing to do it, I can’t even begin to imagine the situation there,” she told CNN “In the Philippines you can buy anything and anyone. I hate to say it but that’s the truth. So if we can’t even pay someone to go in and look for them…” Nemeth added.

Meanwhile, Filipinos in Alaska’s largest city are struggling to make contact with family back home.

Alaska’s Filipino population is just over 19,000 people, according to the 2010 Census, making it the largest Asian group in the state.

Anchorage contractor Vince Fronteras tells the Anchorage Daily News that communications are still down, leaving some people to get information from news reports and rumor. He hails from the island of Bohol, in the central region of the Philippines that suffered devastation in the typhoon.

He says people there were just getting back on their feet from an earthquake when the typhoon hit.