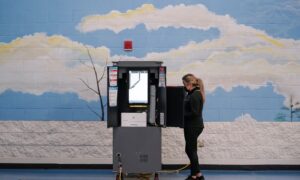 A man was arrested in the deaths of three young girls who were discovered in a suburban Maryland home, according to reports.

Antonio Williams, 24, was arrested on Friday night, Aug. 18, in Clinton, just outside of Washington, D.C., according to CBS News, citing the Prince George’s County Police Department.

An adult family member found the bodies inside the home, said Jennifer Donelan, a spokeswoman for the Prince George’s County Police Department, adding that there was trauma to their bodies.

The police are “now in the midst of a major investigation into what happened to these children” and “who killed them,” she said.

“I wear a uniform but I am a father. Those that responded here today are parents, aunts, uncles and siblings of young children that they care for and love very much. We all feel this loss,” said Hector Velez of the police department. Meanwhile, Prince George’s County Deputy Chief Sammy Patel described the killings as “one of the most difficult scenes” they have encountered.

As local outlet WJLA reported, a family went into the home, discovered the three girls—who are under the age of 10—dead.

State’s Attorney Angela Alsobrooks said Prince George’s County has to deal with “yet another nightmare,” NBC Washington reported. “We are so very, very devastated for these young, beautiful children and their families,” Alsobrooks said.