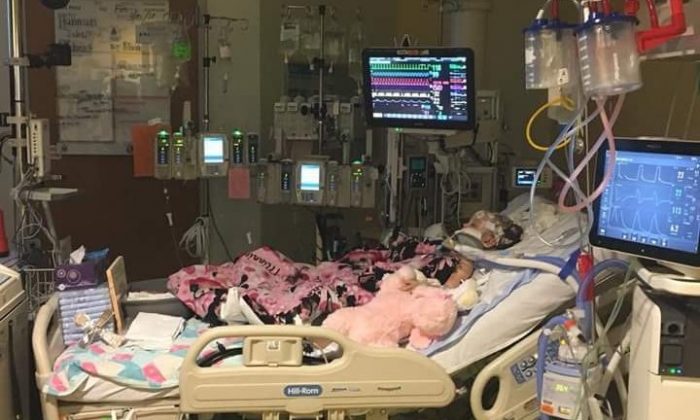 Hannah Wesche, 3, fighting for her life in hospital after being abused by her babysitter. (#Hannahstrong#JusticeforHannah/GoFundMe)
US News

Hannah Wesche, the 3-year-old girl who was left “brain dead” after being allegedly abused by her babysitter, passed away early Sunday morning, March 18, her family said.

Lindsay Partin, 35, is accused of striking and shaking the 3-year-old girl. She has been indicted on charges of felonious assault and felony child endangering by a grand jury on Thursday, March 15, reported WCPO. According to the news station, the charges could likely be upgraded.

Police said Partin was babysitting Hannah on Thursday, March 8, when she called emergency services to report that the toddler had become unresponsive. The call occurred shortly after Hannah’s father dropped her off to Partin around 7 a.m.

Emergency services found Hannah unconscious with labored breathing and obvious bruises on her head and face, according to a police statement.

The child was transported to Fort Hamilton Hospital and then flown to Cincinnati Children’s Hospital in a critical condition.

After questioning by police, Partin admitted to striking the child. She said the 3-year-old had fallen and struck her head on the concrete garage floor the previous day, according to the sheriff’s office. Police are still investigating how the child sustained her injuries.

Relatives told WCPO that Partin was a neighbor and had been caring for Hannah for several months.

Hannah’s aunt, Megan Latham, told the news station that she can’t believe this has happened to an innocent child.

“I just can’t believe that somebody would just take such an innocent child away from us,” Latham, said.

Partin was charged on Monday, March 12, according to the police statement. She posted a $30,000 cash bond and was released from jail on the same day.

Many social media users who have been following Hannah’s condition have been saddened by the news.

Partin is scheduled to appear in court again on April 9, reported Fox 19.