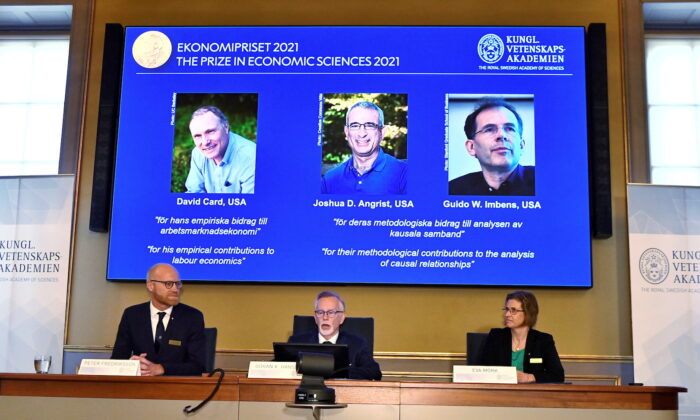 The 2021 Nobel Prize in economic sciences was awarded on Oct. 11 to three economists who managed to pioneer research that brought new insights into the labor market.

Joshua Angrist, a U.S. economist who works at the Massachusetts Institute of Technology, and Guido Imbens, a Dutch-born economist who works at Stanford University, jointly received half of the prize money for their methodological contributions to the analysis of causal relationships, the Swedish award-giving body said in a statement.

David Card, a Canadian-born economist who works at the University of California, was awarded the other half of the prize money for his research on how minimum wage, immigration, and education affect the labor market.

The award comes with a prize of 10 million Swedish crowns (about $1.14 million) and will be shared among the three U.S.-based economists.

Card published the studies in the early 1990s, and his work has led to new analyses and additional insights that have helped lead to increases in the minimum wage. He also found that the incomes of native-born workers can benefit from new immigrants, while immigrants who arrived earlier are the ones at risk of being negatively affected by new immigration.

In the studies, Card examined what happened to jobs at Burger King, KFC, Wendy’s, and Roy Rogers when New Jersey raised its minimum wage to $5.05 per hour from $4.25 per hour, using restaurants in bordering eastern Pennsylvania as the control, or comparison, group. Contrary to previous studies, he and his research partner Alan Krueger, who died in 2019, found that an increase in the minimum wage had no effect on the number of employees at the restaurants.

Another study by Card found that the incomes of native-born workers can benefit from new immigrants. To study the effect of immigration on jobs, he compared the labor market in Miami in the wake of Cuba’s sudden decision to let people immigrate to the United States in 1980, leading 125,000 people to leave the country in what became known as the Mariel Boatlift.

The decision resulted in a 7 percent increase in the city’s workforce. By comparing the evolution of wages and employment in four other cities, Card discovered no negative effects for Miami residents with low levels of education. Follow-up work showed that increased immigration can have a positive impact on income for people born in the United States.

In the mid-1990s, Angrist and Imbens jointly worked on methodological issues that allow economists to draw solid conclusions about cause and effect, even where they can’t carry out studies according to strict scientific methods. The duo developed statistical methods to get around these challenges and determine more precisely what can actually be said about the causes and effects of natural experiments.

“Card’s studies of core questions for society and Angrist and Imbens’ methodological contributions have shown that natural experiments are a rich source of knowledge. Their research has substantially improved our ability to answer key causal questions, which has been of great benefit to society,” said Peter Fredriksson, the chairman of the Economic Sciences Prize Committee.

Last week, the award-giving body announced five Nobel Prizes, including the awarding of the Nobel Peace Prize to two journalists, Maria Ressa and Dmitry Muratov, for their efforts to safeguard freedom of expression in the Philippines and Russia.

Others included the prize in physiology or medicine, which was awarded to Americans David Julius and Ardem Patapoutian for their discoveries into how the human body perceives temperature and touch. The Nobel Prize in physics was awarded to three scientists whose work found order in seeming disorder, helping to explain and predict complex forces of nature.

Benjamin List and David W.C. MacMillan were named as laureates of the Nobel Prize for chemistry for finding an easier and environmentally cleaner way to build molecules that can be used to make compounds, including medicines and pesticides.

The Nobel Prize for literature was awarded to UK-based Tanzanian novelist Abdulrazak Gurnah, whose work puts an emphasis on colonialization and refugees.