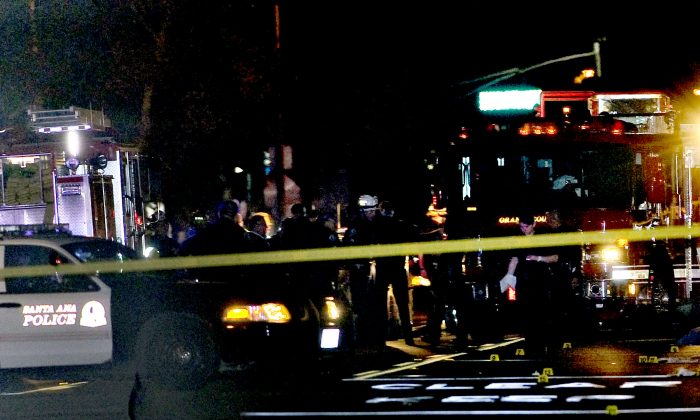 Police and emergency responders at the scene where three teenage girls trick-or-treating in costume were hit by a vehicle and killed while walking across a Southern California intersection in Santa Ana Calif., Friday Oct. 31, 2014. Santa Ana police Cpl. Anthony Bertagna says the girls were hit while in a crosswalk near an elementary school early Friday evening. (AP Photo/The Orange County Register, Paul Rodriguez)
Crime and Incidents

LOS ANGELES—Los Angeles area authorities say they’re looking for a motorist who crashed into three teenage girls trick-or-treating in Halloween costumes, leaving them with fatal injuries and fleeing the scene.

The 13-year-old girls, including twin sisters, were in a crosswalk near an elementary school in Santa Ana when the SUV with two men inside hit them about 6:45 p.m. PDT Friday, police and fire officials said.

Two of them were declared dead immediately, and a third died as paramedics prepared to take her to a hospital, Orange County fire Capt. Steve Concialdi said. Their names were not immediately released.

The scene was “very sad,” he said, “when millions of children, teenagers and adults are out trick-or-treating on a wonderful evening to insert tragedy like this.”

Police were seeking two men from an SUV that hit the girls, police Chief Carlos Rojas said at a media briefing.

The SUV was found abandoned near the scene, but the suspects had not yet been found, Rojas said.

Police spokesman Anthony Bertagna told The Los Angeles Times that the vehicle was traveling at a “high rate of speed” when the crash occurred.

He said two of the girls were 13-year-old twins and the other girl was their friend, also 13.

The paper reported that a crowd of about 200 people, many still wearing costumes, gathered near the scene consoling one another as they watched the police activity.

Concialdi told The Associated Press that fire department sent chaplains and volunteers to the scene to counsel people who were upset.

Jeff Evans was trick-or-treating with his 8-year-old daughter about a half-block away when he heard squealing tires, looked over and saw the collision.

“When we got over here, there was already a tarp over two girls,” Evans told the Orange County Register.

Santa Ana is located near Anaheim and about 30 miles southeast of downtown Los Angeles.

Also Friday night, authorities in Washington state said two 7-year-old girls and a 20-year-old woman sustained life-threatening injuries when they were hit by a car while trick-or-treating in Vancouver.

The Columbian reports that police said a car jumped a curb and hit the trio.

A 33-year-old woman with them and the car’s 47-year-old driver, who remained at the scene, had less serious injuries.