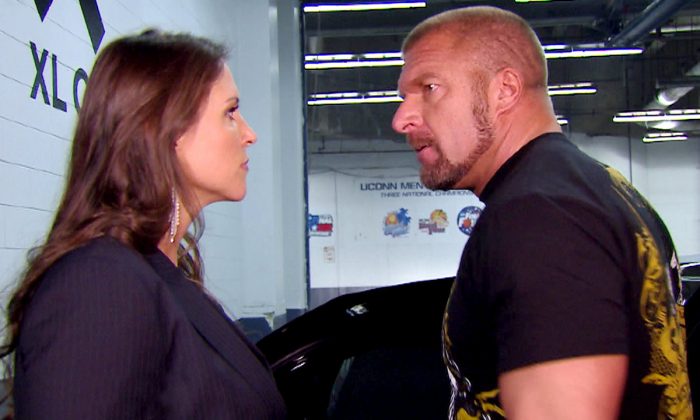 Top Five Matches that should take place before WrestleMania 31: #3

For those that don’t know, WWE’s Survivor Series is one of WWE’s biggest Pay-Per-View events of the year. Every year there is a match that consists of two teams of five; the objective is for each team to try and eliminate the other, one member at a time. Most of the time this match has to do with personal rivalries that have been building up for a couple of months. Individuals from separate rivalries come together to make a team, but I think WWE should take a different route this year. With HHH actually running a lot of the day to day operations in the WWE, I think it would be a good idea to have him make a real grab for power (on television) and have him try to take complete control of the company. Now this would mean that Stephanie would turn baby face, and try to stop him from grabbing control. If Stephanie and HHH got into a feud on T.V., the climax of the feud would take place at the aforementioned Survivor Series; Team McMahon vs Team HHH.

The grab for power could start with HHH doing little things here and there without involving Stephanie. What could also be done (to make the feud even bigger) is have Stephanie gain full ownership of the WWE (on T.V. of course). Then later on, have HHH get Stephanie to sign something without her reading it, later realizing she signs the company over to HHH. Having HHH be in control of everything could make him an even bigger heel than he is now. He could probably even go as far as firing certain superstars like The Shield, Daniel Bryan, and since he has control he could even fire Stephanie.

In order for her to turn it on him she would have to get superstars on her side, but with her having made enemy’s it could probably take a while. Stephanie would have to get wrestlers that HHH has tormented like The Shield, and Daniel Bryan on her side. With Stephanie having tormented them in the past as well, she would have to convince them that she is the lesser of the two evils. After Stephanie gets people on her side she would make the play for power. What she could do is give HHH an ultimatum, she can sue him, or they could have a match a Survivor Series for control of the company; Team McMahon vs Team HHH.

Team HHH could consist of Kane, Bray Wyatt, and the group Evolution (Randy Orton, Batista, and HHH). Team McMahon could have Daniel Bryan, John Cena, and The Shield (Roman Reigns, Dean Ambrose, and Seth Rollins). I think that if done right a feud between Stephanie and HHH could be very interesting. When you consider the fact that HHH does actually run a lot of the companies day to day operations, and with him being a good heel, (if done right) this storyline could be very good. With all thats going on right now in the WWE, and how much The Authority (HHH and Stephanie) throws its weight around, it wouldn’t be hard to believe that one of them could get power hungry. The idea of a feud between Stephanie  and HHH is very interesting (to me anyway). Creatively there are a lot of ways WWE could go with this, and if  it were to happen it could be very entertaining to watch.