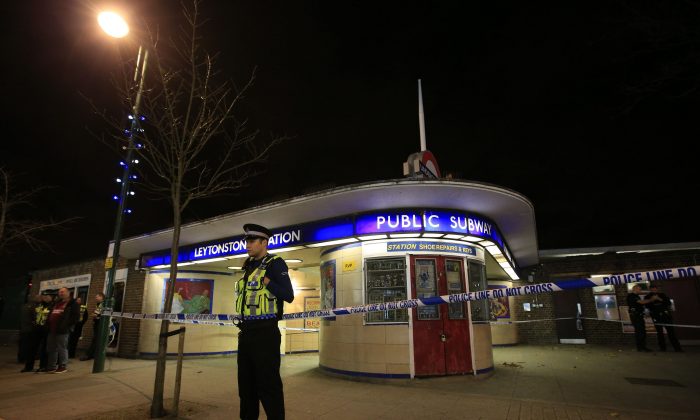 Police cordon off Leytonstone Underground Station in east London following a stabbing incident, Saturday, Dec. 5, 2015. The stabbing is being treated as a "terrorist incident," the London police said Saturday. The London police counter-terror command said in a statement that it is investigating the incident in which a man was threatening people with a knife at around 7 p.m. (1900 GMT; 2 p.m. EST). One person sustained serious injuries and two others received minor injuries. (Jonathan Brady/PA via AP)
UK

2 Stabbed at London Tube Station in Terror Attack: ‘This is for Syria’

A man stabbed and injured twopeople in an east London Tube station on Saturday before he was subdued by police with a Taser and he was arrested.

London’s Metropolitan Police said police were treating the stabbing as a terrorist incident.

Knifeman screams ‘this is for Syria’ in London tube machete attack https://t.co/EQCEWouPZC pic.twitter.com/O422ly9IAK

A witness in the attack at the Leytonstone station said the attacker shouted, “This is for Syria.”

The person who claims to have seen the attack, tweeted: “I was so scared I ran for my life. After good 10-15 police came and got the guy and arrested him.

“And as he was coming out this is what he said ‘This is what happens when you [expletive] with mother Syria all of your blood will be spilled.'”

A video uploaded on Twitter and elsewhere shows the incident (It can be seen at the bottom of this article. WARNING: The footage might be disturbing for some).

The move comes just days after the U.K. Parliament approved British airstrikes on ISIS in Syria.

The 29-year-old suspect was arrested on suspicion of attempted murder. An address in London is now being searched by police, the BBC reported.

British Transport Police said more officers will be deployed around Tube stations. The Tube, known as the London Underground, has 270 stations on 11 lines that stretch around 250 miles.

Video footage captured the incident. Police are seen firing a stun gun at the man, who is wearing a gray top, tan pants, and a black hat.

#YouAintNoMuslimBruv trending in response to the knife attack at a London tube station https://t.co/fpfJm7RDFY pic.twitter.com/gmNz46DB3p

David Pethers, a 33-year-old lift engineer, was cut in the attack. “It’s just a cut on my neck, it wasn’t too deep or too serious really,” he told the Daily Mail. “I was walking down into the station, as I got to the ticket office there was a pool of blood on the floor and a guy with a knife going mad.”

He added: “He was saying something about Syria. To be honest he just looked crazy, he just had a crazy look in his eye.”

“Basically the scene I walked into was the guy lying on the floor, blood everywhere, and [there was] this guy shouting and that’s when I tried to get everyone out of the station.”

Here is the footage (WARNING: Graphic):