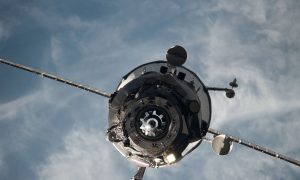 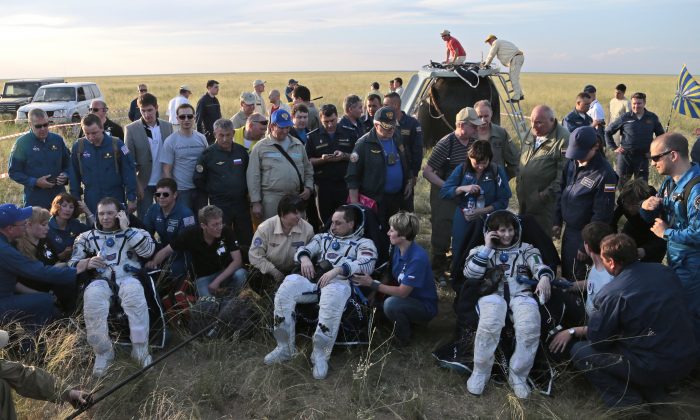 DZHEZKAZGAN, Kazakhstan—A three-person crew from the International Space Station landed safely in the steppes of Kazakhstan on Thursday after a longer-than-expected orbital stint.

NASA astronaut Terry Virts, Samantha Cristoforetti of the European Space Agency and Russia’s Anton Shkaplerov returned to Earth after 199 days on the station, nearly a month longer than planned.

Their Soyuz capsule landed on schedule at 7:44 p.m. local time (1344 GMT; 9:44 a.m. EDT) about 145 kilometers (90 miles) southeast of the city of Dzhezkazgan, in what a NASA commentator described as a textbook homecoming.

After descending slowly under a striped red and white parachute, the craft touched down softly under the sun-drenched steppe. Russian helicopters buzzing around the landing area quickly delivered search and rescue crews to help the astronauts get out of the capsule and quickly check their condition.

The smiling astronauts sat in reclining chairs, adapting to Earth conditions after months in zero gravity and speaking to doctors and space officials. They were then carried into an inflatable tent for initial medical checks.

After the check-up, the crew will be flown by helicopters to the city of Karaganda, where they will board planes back home.

The mission’s extension was caused by the failed launch of a Russian cargo ship in April.

The Soyuz rocket that failed in April is used to launch spacecraft carrying crews, so Russian space officials delayed the crew’s return and further launches pending an investigation.

A Soyuz rocket successfully launched a satellite last week. Another Soyuz will launch a Progress cargo ship to the station in early July to be followed by the launch of a new crew later in the month.

The new crew will join Russians Gennady Padalka and Mikhail Kornienko, and NASA’s Scott Kelly, who have remained in orbit. Kelly and Kornienko are in the midst of a yearlong orbital mission.