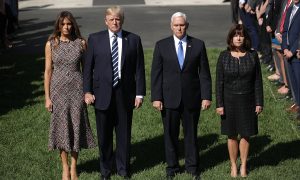 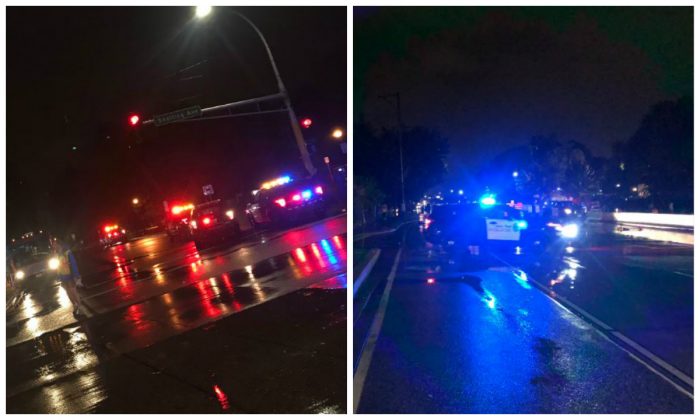 3 Shot, One Hit by Car in Chaotic Scene Outside Minnesota State Fair

Three people were shot and a fourth was run over by a car in a chaotic scene just outside the Minnesota State Fair late Sept. 2.

The fair was ending on Monday.

Police officers got a call about a pedestrian being hit by a vehicle on Snelling Avenue, about two blocks north of the main gate to the fairgrounds, and rushed to the intersection around 10 p.m. to find a 19-year-old woman lying on a road.

She had been hit by a car and was gravely injured, Steve Linders, spokesman for the Saint Paul police department, told reporters during a press conference. First responders rushed her to a nearby hospital and she was in critical condition.

“Officers rushed to the scene. They found a chaotic scene. There were a lot of people there,” Linders said.

Witnesses told officers that a fight erupted in the area just before the woman was hit. The driver initially stopped but fled when people started hitting his vehicle. After leaving the scene, he called 911 and confessed to hitting the woman. Police said he was cooperative and did not appear to be impaired.

While working on the case, officers heard multiple gunshots go off about a block away, close to the main entrance of the fairgrounds.

“As our officers do, they ran toward the gunfire: a, to look for any victims, to make sure they could render aid; and b, to try to find the person or people responsible for the shooting.”

Officers found a man who had been shot; two others arrived at nearby hospitals with gunshot wounds shortly after.

It was an “incredibly busy, chaotic night,” Linders said, before condemning the shooter or shooters.

“Everybody was put at risk, there were several shots,” he said. “This is incredibly concerning. It doesn’t matter if the person was shooting east or west, north or south, there’s a lot of people in that area, and it was incredibly dangerous.”

“It’s shockingly brazen. Audacious isn’t even a strong enough word. It was dangerous, and we’re lucky that more people weren’t injured or killed,” he added.

No arrests had been made as of Tuesday morning in the shootings near the fair or a shooting on the east side that left the victim dead. It was the 15th homicide of the year and about 105 people have been shot in the city.

Kosol Chamnap, a Minneapolis resident, said that he was operating a food stand directly across from the main entrance of the fair and heard six gunshots fired minutes after the closing fireworks show at the fair.

“We heard six gunshots. Bystanders rushed away from the scene as police on foot and squads, ambulances rushed towards the scene. Concurrently the storm hit the area and everyone sought refuge under tents including our team,” he wrote on Facebook. “For the most part everyone was calm and authorities responded within seconds. Prayers to all.”

Gov. Tim Walz was among those reacting, releasing a statement on Tuesday. “The State Fair is called the Great Minnesota Get-Together for a reason: it brings communities across the state together. Last night, that sense of community was taken by gun violence. I am praying for the Minnesotans affected and their families,” he said.