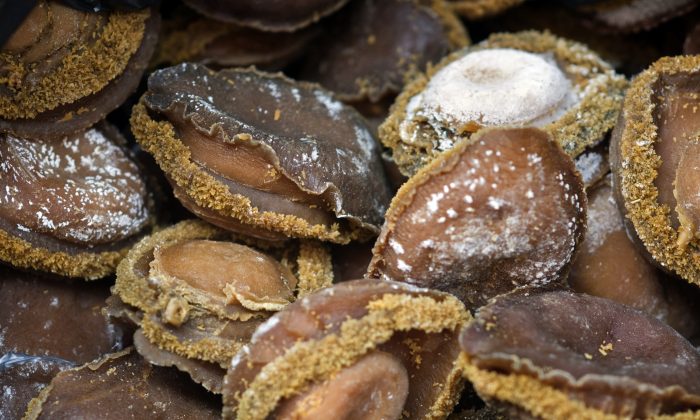 View of dried abalone that was seized by the Ministry of Agriculture, Forestry and Fisheries in South Africa in March 2012 (RODGER BOSCH/AFP/Getty Images)
US

3 sea snail divers killed: Three divers who were searching for an expensive type of sea snail called abalone were killed over the weekend off the coast of Northern California, it was reported. The divers were killed in separate incidents.

Cedric Collett, a 66-year-old retired firefighter, was diving for abalone with a friend but he did not surface later on, reported the Santa Rosa Press Democrat. His body was discovered with his weight belt that is used to help a diver stay submerged while picking abalone off rocks.

On Sunday, the body of Kenneth Liu, a 36-year-old San Francisco diver, was found off Fisk Mill Cove. He was pulled to the beach by others but he died later after they could not revive him.

And later on Sunday, another diver was found dead near MacKerricher State Park north of Fort Bragg.

“The surf was absolutely pounding on us,” tactical flight officer and Sonoma County sheriff’s Deputy Henri Boustany told the newspaper after he helped with the recovery.

The Sonoma County sheriff’s office responded to all three calls and lifted two bodies from the water and another from the shore. “It is the busiest we’ve been in that short amount of time with that many horrible outcomes,” helicopter pilot Paul Bradley said.

“It was the beautiful weather that brought people out,” Sonoma County sheriff’s Sgt. Ed Hoener told the San Francisco Chronicle Monday. “There are dozens of people up here on any given day to go diving. It is not unusual to have a fatality every year, but it is especially unusual to have three die in one weekend.

Divers in 2011 noted that abalone have been dying off along the Sonoma County coastline, according to reports.

The California Fish and Game Commission said that the die-off of abalone and other invertebrates was caused by red tide. At the time, officials considered a permanent ban on abalone fishing.