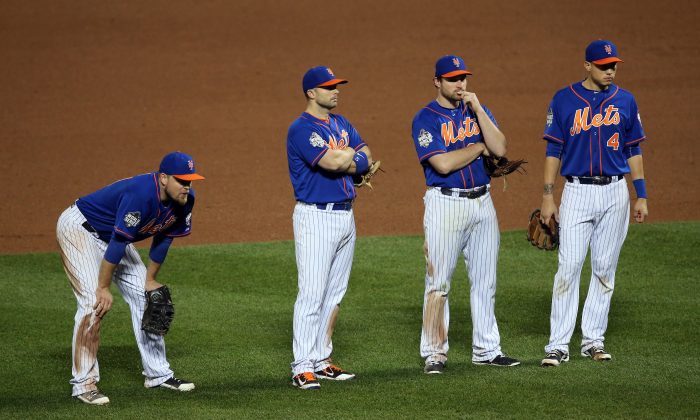 3 Reasons Mets Have a Bright Future

Despite the mistake-ridden ending in the World Series, the Mets had a great run. They won their first division title since 2006, first NL pennant since 2000, they completely dominated the Cubs in the NLCS, and although they lost the Fall Classic in just five games, it was a lot closer than the final count indicated.

The biggest takeaway Mets fans should have from this season is that they have a contender for years to come. Why? Three reasons:

The Mets really only had one major strength—starting pitching—and were nearly able to ride it all the way to a championship.

The entire rest of the league is envious of the Matt Harvey/Jacob deGrom/Noah Syndergaard/Steven Matz rotation, and the good news for Mets fans is that they’re not going anywhere. In fact, with Zack Wheeler (Tommy John surgery) expected to return next year, the rotation could be even better. All they need is a little help in some other areas to fill out the team.

If you think about it, New York was just a bad pitch to Alex Gordon (Game 1), an errant throw home (Game 5), and a simple putout away at second (Game 4) from winning it all despite a mediocre defense, shaky bullpen, and inconsistent offense.

That’s how far starting pitching can take you, and the Mets have it in spades.

The 22-year-old is a major building block for the future—and an important one. In case you haven’t noticed, most of the Mets’ good young players are starting pitchers. It’s not a bad problem to have, but as the World Series showed, you still need to hit to win.

Four of the Strangest Plays in Baseball History

Conforto’s emergence will loom even larger with the uncertainty of free-agent-to-be Yoenis Céspedes. It would be unlike Mets GM Sandy Alderson to break the bank for Céspedes—the 30-year-old slugger who has a rocket for an arm, lacks range in the outfield, and had an unfortunate base-running blunder that ended Game 4. If the bidding goes into the nine-digit range, expect the Mets to bow out and give Conforto a bigger role.

Alderson is the one who persevered through some lean—yet necessary—rebuilding years. The Mets GM made the unpopular decisions to deal Carlos Beltran for Wheeler, R.A. Dickey for Syndergaard and Travis d’Arnaud, and letting José Reyes walk in free agency. All those deals were made for a better future and it’s here now.

There’s already speculation that Alderson is ready to make a qualifying offer to playoff hero Daniel Murphy so that the Mets can get something in return when he signs elsewhere—a likely scenario given that he’s 30 and is a liability defensively.

It’s these kinds of moves by Alderson—taking the emotion of letting the reigning NLCS MVP walk in free agency—that helped build the team in the first place. Fortunately for the Mets, they still have him calling the shots.