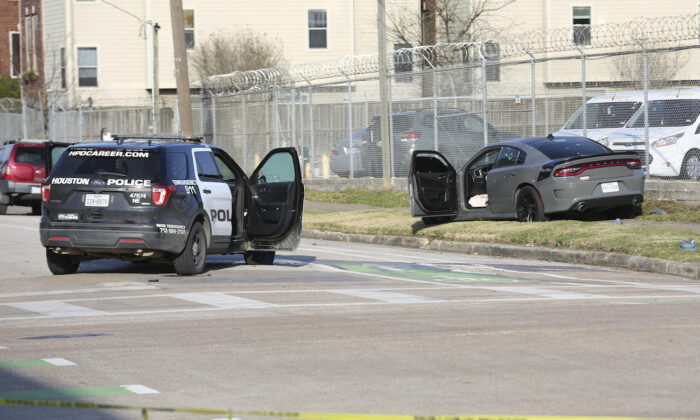 Authorities investigate the scene where three Houston Police officers were reportedly shot in the 2200 block of McGowen St., at the intersection of McGowen Street and Hutchins Street, in Houston, on Jan. 27, 2022. (Jon Shapley/Houston Chronicle via AP)
Crime and Incidents

Three police officers are in stable condition late Thursday after they were injured with gunshot wounds in a shootout near downtown Houston, Texas.

The Houston Police Department announced Thursday afternoon that three officers had been shot in the 2100 block of McGowen St.

“The suspect fled the scene in a white Mercedes and is being sought at this time. Please avoid the area,” the department announced on Twitter. “HPD commanders & PIO are en route to Memorial Hermann Hospital where officers are being taken.”

Later, at a a news conference, Police Chief Troy Finner told reporters that officers were responding to a family disturbance call at 2:40 p.m. at a home in northeast Houston.

Police were responding to a report of a shooting at the home of the suspect’s girlfriend, said Doug Griffith, president of the Houston Police Officers’ Union. When officers arrived, the suspect fled in a vehicle and led police on a chase for several miles.

One of the officers was shot in the arm, another was shot in the leg and the third was shot in the foot, Griffith said. The chase ended when the suspect’s vehicle crashed at an intersection in a residential neighborhood just off Interstate 69 on the southeastern edge of downtown Houston.

Finner said the suspect, after having crashed, had carjacked a white Mercedes at gunpoint. After having fled in the Mercedes, the suspect headed to a home located several miles northeast of where the crash occurred.

Officers surrounded the home, from which the suspect fired multiple times but did not hit any of the officers, who returned fire, Finner said. The suspect remained in the home until shortly after 7:30 p.m., when officers arrested him after hours of negotiations, according to Houston police.

The suspect was believed to be the only person in the home. It was not immediately known why he went there, Finner said.

The suspect was identified as Roland Caballero, 31, according to Andy Kahan, director of victim services and victim advocacy at Crime Stoppers in Houston. Caballero, who has five prior felony charges, was wanted for aggravated robbery with a deadly weapon and unlawfully carrying a weapon with a felony conviction, Kahan wrote.

Criminal history records showed that Caballero’s first arrest was in 2008, when he was 18 years old, reported local outlet KPRC.

Houston Mayor Sylvester Turner said in a statement to local outlets he was relieved to hear that the injuries of the three police officers were not life-threatening.

“My thoughts and prayers go out to them, and I will be at the hospital soon to check on their recovery, thank them for their service and speak to their families,” he wrote. “I ask everyone to pray for the officers who were shot and for every law enforcement officer working on the streets of Houston. We live in dangerous times, and it will take all of us working together to make our city safe.”

Turner told a news conference late Thursday that the shooting reflects the rising violent crime in Houston and other U.S. cities over the past several years. Turner said he and Finner plan to announce next week “some additional steps” his administration will take to tackle rising crime in Houston.

“It’s going to take all of us working together to have a very safe city,” Turner said.