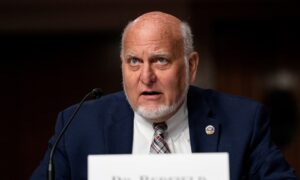 Security personnel keep watch outside the Wuhan Institute of Virology during the visit by the World Health Organization team tasked with investigating the origins of COVID-19, in Wuhan, Hubei Province, China, on Feb. 3, 2021. (Thomas Peter/Reuters)
Viewpoints

3 Points the Media Is Still Getting Wrong About Wuhan Lab Theory, and the Documents to Prove It

Thanks to some confusing verbal gymnastics by Dr. Anthony Fauci, some in the media are giving the impression that there’s no proof that U.S. tax money funded gain-of-function research, or that perhaps the research didn’t qualify as gain-of-function. However, the evidence on this point is clear-cut.

1. US taxpayer money did go to controversial gain-of-function research.

A 2015 published study specifically discloses that the research is gain-of-function research that took bat coronavirus that was harmless to people—and made it infectious in humans. The study further states that the National Institutes of Health (NIH) approved continuation of the research, even amid a general ban on such studies. (See study excerpt below.)

The research was conducted by numerous U.S. scientists, including Ralph Baric at the University of North Carolina, with the lead virologist at the Wuhan Institute of Virology, Shi Zhengli. (See study authors below.)

2. The gain-of-function research with China not only received US support and money through the nonprofit EcoHealth Alliance, but also directly.

Many media reports refer to several hundreds of thousands of dollars in tax money sent from the NIH to the Wuhan lab via the New York-based nonprofit EcoHealth Alliance. However, research with the lab, and the lab itself, received significant additional U.S. support, including:

3. The Chinese Wuhan lab received direct US support in addition to the indirect grants from EcoHealth Alliance.

State Department cables from January 2018 detail assistance from the University of Texas Medical Branch, including university “researchers … helping train technicians who work” in the Wuhan Institute of Virology lab. The Texas lab is supported by Fauci’s National Institute of Allergy and Infectious Diseases under NIH. (See excerpt from cable below.)

Correction: A previous version of this article inaccurately cited media as reporting an incorrect figure for the amount of tax money sent to the Wuhan Institute of Virology. The Epoch Times regrets the error.