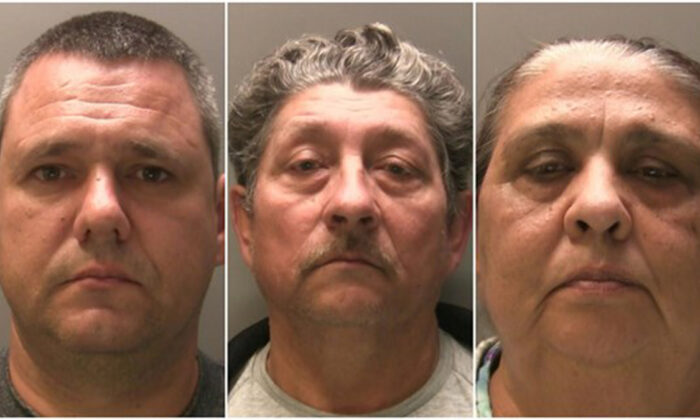 Three people in Wales face jail after being convicted of forcing a vulnerable Latvian immigrant to work off an ever-increasing “debt” that included a fictional sum to pay for the costs of Brexit.

Normunds Freibergs, 40, Jacobus Stankevicius, 59, and his wife Ruta Stankeviciene, 57, were convicted at Newport Crown Court under Britain’s Modern Slavery Act and will be sentenced in October.

The court heard Rolands Kazoks, 31, was living in Germany when he went onto a Latvian website, Draugiem, to look for jobs in Britain, according to a press release from the Gangmasters and Labour Abuse Authority (GLAA).

He made contact with Freibergs, who pretended to work for a recruitment company.

Freibergs promised him a job at a bakery and said he would only have to pay £85 ($100) a week for rent. Kazoks travelled to the Welsh town of Newport and moved in with Stankevicius and his wife.

Warned ‘Bad People’ Would Come After Family in Latvia

If he questioned his debt—which rose to £2,000 ($2,370) after interest was added—he was threatened with violence and warned “bad people” in Latvia would come after his family if he tried to leave.

The couple ridiculed Kazoks for being smelly but refused to let him have a daily shower.

The trio also controlled his passport and bank card and stole parcels sent from his relatives.

Kazoks told investigators he was assaulted by Freibergs and Stankevicius and was hit so hard by Freibergs on occasion he struggled to breathe properly.

The GLAA said it launched an investigation in October 2018 after a genuine recruitment company raised concerns after hearing rumours among staff at the chicken factory in Abergavenny.

They discovered his wages of around £500 ($600) per week were paid into an online bank account that the trio controlled.

Kazoks has since moved to another part of Britain and has entered the National Referral Mechanism, which supports migrants who have been trafficked.

GLAA Investigating Officer Laura Thomas said in a statement: “Exploiting vulnerable workers is completely unacceptable and we will not stop in our efforts to bring those who treat people as commodities to justice. Debt bondage, where exploiters control and trap their victim in an endless cycle of perceived debt which realistically can never be repaid, is something our organisation unfortunately encounters all too often.”