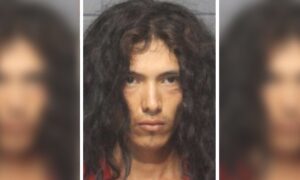 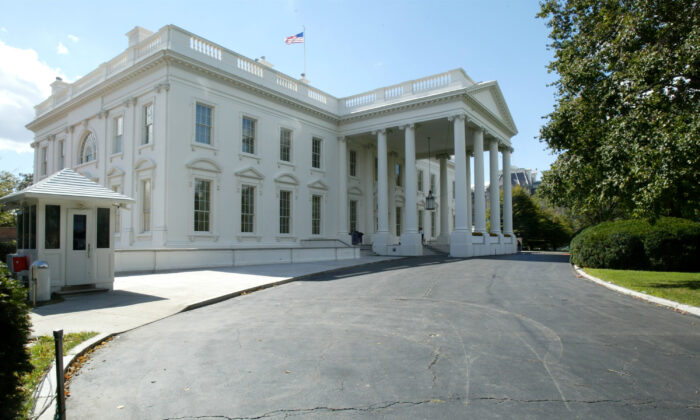 The exterior of the White House is seen in Washington on Oct. 2, 2003. (Alex Wong/Getty Images)
US News

Two men and one woman were stabbed in the 1400 block of New York Avenue at around 2:25 a.m., and suffered minor, non-life threatening injuries, police said in a statement. They were taken to a local hospital.

The Metropolitan Police Department (MPD) said that it is on the lookout for two black males wearing all black clothing, and one black female wearing black sweatpants with a white stripe, orange leggings, and a grey coat, noting that she was seen armed with a knife.

According to WUSA9, the MPD initially released a statement that identified two rival protest groups as those involved in the incident. The department has since clarified that it “cannot verify any specific affiliation of the suspects.”

An individual claiming to be the head of the Proud Boys, Enrique Tarrio, claimed Wednesday that he and two other group members were also victims in the stabbing incidents.

The Proud Boy’s core values, according to the group’s website, include supporting free speech and gun rights, being against the war on drugs and racism, supporting minimal government and strong borders.

“We were helping some guy that was getting stabbed by two black males and one female. Bevelyn got stabbed as well as two Proud Boys and the guy they were attacking,” Tarrio told the outlet. “I got slashed, but it’s not serious. We were walking to our cars.”

The victims told police that the suspects were affiliated with the Black Lives Matter movement, according to WJLA.

MPD Police Chief Peter Newsham later said during a news outlet that officers interviewed the victims at the hospital, and are not able to verify who those involved are affiliated with. The department also did not confirm that the victims were members of the Proud Boys.

He said that information gathered at the scene is “preliminary in nature” and that it will be part of the investigation.

The MPD told The Epoch Times that there are no further updates to be provided at this time.