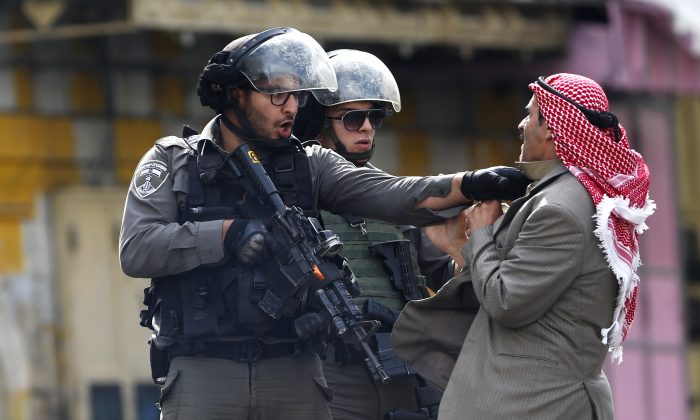 A Palestinian is pushed an Israeli policemen amid clashes in Hebron, West Bank, Saturday, Oct. 10, 2015. A Palestinian teenager stabbed two Israelis in Jerusalem Saturday before being shot dead by police forces, the latest in a series of stabbing attacks against civilians and soldiers that have spread across Israel and the West Bank in the past week. The violence, including the first apparent revenge attack by an Israeli Friday and increasing protests by Israel's own Arab minority, has raised fears of the unrest spiraling further out of control. (AP Photo/Nasser Shiyoukhi)
Middle East

JERUSALEM (AP) — A wave of Israeli-Palestinian violence showed no signs of abating Sunday, as three Palestinians, including a 2-year-old and a 13-year-old, were killed by Israeli forces, and four Israelis were wounded in an evening stabbing attack.

The attacks have been primarily stabbings and shootings, but a Palestinian woman seriously injured herself when she detonated a gas canister on Sunday. The attack, which lightly wounded a police officer, was the first in the current round of violence to involve such an explosive device.

The unrest erupted last month around the Jewish New Year, with clashes beginning at a contested holy site in Jerusalem and quickly spreading to other parts of the city, across Israel and into the West Bank and Gaza Strip. At least 24 Palestinians, including eight attackers, have been killed by Israeli forces, while five Israelis have been killed in attacks.

With random stabbings happening each day, the violence has Israelis on edge. Officials have called on citizens to carry guns in public for self-defense, and store owners say sales of guns and pepper spray are soaring.

“I think everyone should come and get a gun license,” said Idan Albilia, a Jerusalem resident who was at a gun shop purchasing his first weapon. “We need to defend ourselves. I think this is the only thing that will help us in this situation.”

Police are on high alert in all major cities across Israel, and an Israeli ambulance drove through central Jerusalem Sunday night and announced an emergency blood drive over a loudspeaker.

Addressing his Cabinet Sunday, Israeli Prime Minister Benjamin Netanyahu said the country was battling a “wave of terror” fueled by “systematic, untrue incitement” by the Palestinian Authority in the West Bank and the Islamic Movement in Israel.

He said he would be holding consultations to discuss sanctions against the Islamic Movement, which has led a campaign accusing Israel of plotting to take over the Jerusalem compound revered by both Jews and Muslims. Israel denies the accusations.

During a briefing to the Cabinet, Israel’s Shin Bet security agency said the Islamic Movement was a main instigator of the rumors. It also said the Palestinian president, Mahmoud Abbas, is not encouraging attacks on Israelis and has even instructed his security services to prevent violence, though it said other Palestinian officials were participating in incitement.

The fighting has put both leaders in a bind. Netanyahu is under heavy pressure from hardliners in his government to take tougher action against the Palestinians. But a crackdown would risk triggering even more violence and international criticism.

A new poll published in the Yediot Ahronot daily on Sunday showed popular support for Netanyahu slipping. Some 73 percent of respondents were highly or fairly dissatisfied with his handling of the recent attacks. When asked who was best qualified to deal with the violence, Netanyahu came in third, while two ultranationalists, former Foreign Minister Avigdor Lieberman and pro-settler Education Minister Naftali Bennett, came in first and second. The survey polled 501 people and had a margin of error of 4.4 percentage points.

Abbas, meanwhile, faces his own domestic troubles. Following last year’s collapse of peace talks, and with little hope for the future, the Palestinian public has grown deeply unhappy with Abbas. Although Abbas has been a critic of violence, opposing the public demonstrations against Israel could deepen his unpopularity.

In response to renewed rocket fire toward Israel overnight, the military said it had carried out airstrikes in Gaza targeting weapons manufacturing facilities belonging to the ruling Hamas militant group. The Palestinian Health Ministry said a home in southern Gaza was struck, killing a 30-year-old pregnant woman and her 2-year-old daughter. Four other Palestinians were wounded, including her husband and son.

Late Sunday, another rocket was launched from Gaza and landed in an open area in southern Israel. No injuries were reported.

The West Bank has been increasingly tense, with near-daily violent demonstrations. 13-year-old Ahmad Saraka was shot dead during a clash between Palestinian demonstrators and Israeli troops near a military checkpoint, according to Ramallah Government Hospital director Ahmed Bitawi. The Israeli military said it was responding to Palestinian demonstrators who had blocked roads and thrown rocks and firebombs at forces.

In another clash in the West Bank, at least 45 Palestinians were wounded by live bullets, the Palestinian Health Ministry said. The Israeli military said hundreds of Palestinians rolled burning tires and threw rocks at Israeli forces, who responded with 0.22 caliber rounds.

Earlier in the day, on a West Bank highway near Jerusalem, police ordered a woman to pull over after she was seen trailing a police vehicle, and when an officer approached her car, she chanted “God is greatest” and detonated the gas canister, Israel’s Shin Bet security agency said. Police found handwritten letters on her praising Palestinian “martyrs,” and more gas canisters in her car.