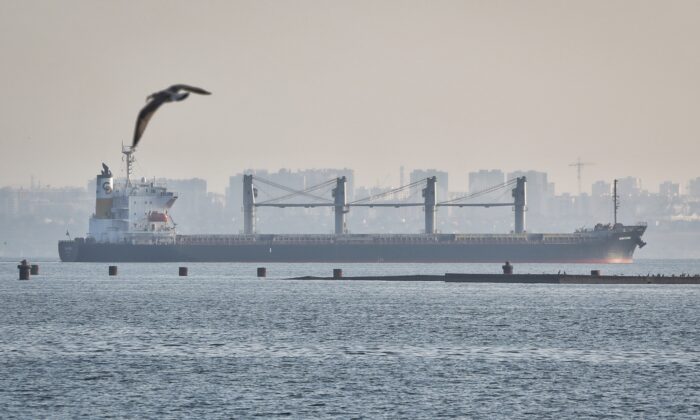 The ship Navi-Star carrying a load of corn starts its way from the port in Odesa, Ukraine, on Aug. 5, 2022. (Nina Lyashonok/AP Photo)
International

Three more ships carrying thousands of tons of corn left Ukrainian ports Friday and traveled mined waters toward inspection of their delayed cargo, a sign that an international deal to export grain held up since Russia invaded Ukraine was slowly progressing.

Two of the three ships are anchored north of Istanbul on Saturday and awaiting inspection, the Turkish Defense Ministry said.

The Panama-flagged Navi Star, which is carrying 33,000 tons of grain to Ireland, left Odesa on Friday.

The ministry posted on Twitter that Navi Star would be inspected by the Joint Coordination Center, the body set up under an agreement to export some 20 million tons of grain from Ukrainian silos.

The Maltese-flagged Rojen, carrying 13,000 tons of corn destined for the United Kingdom, arrived off of Istanbul’s northern Black Sea coast shortly after the Navi Star.

The Rojen departed Chornomorsk and will be inspected Sunday morning, the ministry said.

A third ship—the Turkish-flagged Polarnet hauling 12,000 tons of corn—will dock in Turkey’s Derince port once it passes through the Bosporus.

The coordination centre is run by officials from Ukraine, Russia, Turkey, and the United Nations.

The checks seek to ensure that outbound cargo ships carry only grain, fertilizer, or food and not any other commodities and that inbound ships are not carrying weapons.

The first grain shipment passed through Istanbul on Monday, bound for Lebanon.

The ships are from among more than a dozen bulk carriers and cargo ships that had been loaded with grain and stuck at Ukrainian ports since the start of Russia’s invasion in late February.

The Black Sea region is dubbed the world’s breadbasket, with Ukraine and Russia key global suppliers of wheat, corn, barley, and sunflower oil that millions of impoverished people in Africa, the Middle East, and parts of Asia rely on for survival.

However, the initial shipments are not expected to have a significant impact on the global price of corn, wheat and soybeans. For starters, the exports under the deal are off to a slow, cautious start due to the threat of explosive mines floating off Ukraine’s Black Sea coastline.

And while Ukraine is a major exporter of wheat to developing nations, there are other countries, such as the United States and Canada, with far greater production levels that can affect global wheat prices.

In a statement after the talks that lasted four hours, Putin and Erdogan emphasized “the necessity of a complete fulfillment of the package deal reached in Istanbul … including unhindered export of Russian grain and fertilizers.”