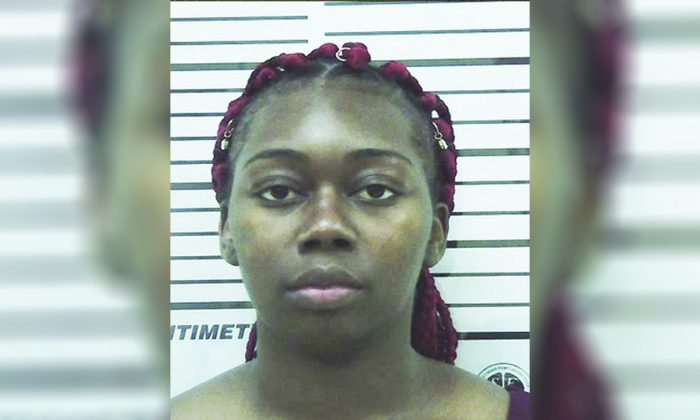 A Georgia woman has been arrested on multiple charges after an incident that resulted in the death of her three-month-old baby.

During the encounter, Harrison drops her three-month-old baby on the asphalt and the two women continue fighting, reported WALB. Bystanders quickly run toward the woman to stop the fight, and one of them picks up the infant.

The incident took place outside of Thomas Beauty Supply at 614 1st Ave SE on July 19.

According to WTXL, Harrison took the baby to the hospital the next day and claimed the injuries were incurred when a family friend, 26-year-old Carneata Clark, accidentally dropped the infant while at home.

The baby later died at Colquitt Regional Medical Center due to head injuries suffered during the fall.

Clark corroborated Harrison’s claims, which were later disproven when surveillance footage of the incident surfaced.

“We investigated the incident and determined the baby did not receive his injuries how it was reported,” Lt. Freddie Williams, with the Moultrie Police Department, told reporters.

“It was reported to us that the baby had fallen from the caregivers arms and received the injuries, then we got information that there was a fight,” Willams said.

BREAKING: The altercation between the two women led to the 3-month-old falling onto the pavement. This is a developing story and we will update as more information becomes available. https://t.co/OAd7iBhp4E

Authorities said two other woman who were involved in the fight are in custody, but the department has not yet released their names.

“This is very disturbing, that two adults would fight in public place, especially while holding a three month old child in her arms,” Williams added.

Harrison was denied bond, while Clark was released from jail on a $5,000 bond.

The infant’s body is scheduled to undergo an autopsy and authorities said the investigation is ongoing.

Earlier this month, a 19-month-old infant fell to her death while on a cruise ship in San Juan, Puerto Rico.

The girl, Chloe Wiegand, was said to have slipped from the grasp of her grandfather, Salvatore Anello. She fell from the 11th floor of the Freedom of Seas cruise ship, which is operated by Royal Caribbean. The fall, estimated to have been at about 150 feet, took place on July 7.

A lawyer for the family of the girl said that Anello had placed her on railing without realizing there was no glass in the room, which is a children’s pool known as the “H20 Zone.”

“The grandfather is with Chloe, they’re playing and there’s this wall of all windows, it’s all glass windows,” he added.

“Chloe used to love to bang on the glass at her brother’s ice hockey games, so her grandfather takes her over to the windows, he thinks it’s all glass.

There’s a wood railing along there, he puts her on that thinking she’s going to bang on the glass and it’s going to be great, and the next thing he knows, she’s gone.”

The family shared a photo of the open window that she fell through on July 9. The Daily Mail posted the new image, showing the open window, investigators, police tape, and other people.

The 11th-floor window can be seen next to other windows that appear to be closed. The photos were shot by the girl’s father, who is a police officer in South Bend, Indiana.

“We are deeply saddened by (the) tragic incident, and our hearts go out to the family,” Royal Caribbean Cruises told CNN in a statement.

“We’ve made our Care Team available to assist the family with any resources they need. Out of respect for their privacy, we do not plan to comment further on the incident.”

Jack Phillips and Mimi Nguyen-Ly contributed to this report.