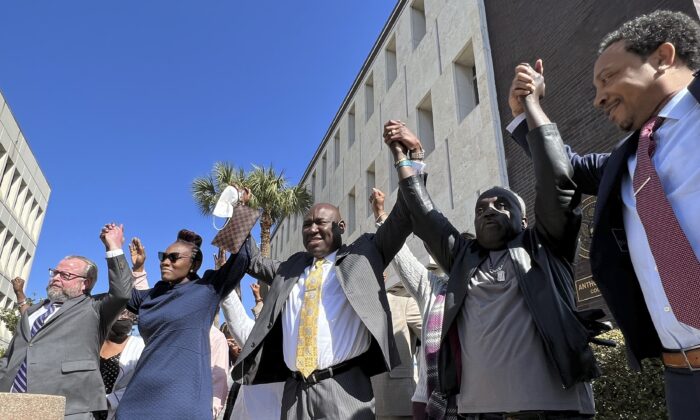 The family and attorneys of the Ahmaud Aubery raise their arms in victory after all three men were found guilty of hates crimes at the federal courthouse in Brunswick, Ga., on Feb. 22, 2022. (Lewis M. Levine/AP Photo)
US News

The three men convicted in 2021 in the death of Ahmaud Arbery were found guilty on Feb. 22 of federal hate crimes.

A jury convicted Gregory McMichael, his son Travis McMichael, and their neighbor William Bryan after deliberating for about four hours.

All three men were found guilty of violating Arbery’s civil rights by attacking him because of his race, and of attempted kidnapping.

The McMichaels were also found guilty of using a firearm while carrying out a violent crime.

The hate crimes felony carries a maximum penalty of life in prison.

The charges were brought in April 2021, about a year after the McMichaels and Bryan chased down Arbery when they spotted him running in their neighborhood, Satilla Shores, which sits outside Brunswick, Georgia. Travis McMichael then shot Arbery with his shotgun after a scuffle over the weapon ensued.

Federal prosecutors said the trio, through force and threat of force, injured and intimidated Arbery “because of Arbery’s race and color.”

Wanda Cooper-Jones, Arbery’s mother, told reporters outside the courthouse Tuesday that she was “very thankful that a good jury was selected.”

“We got a victory today, but there’s so many families out there that don’t get victories,” she added.

“The defendants’ actions and the racism that fueled them have inflicted enduring trauma on Mr. Arbery’s family, his friends, his community, and communities across the country,” Attorney General Merrick Garland said in prepared remarks in Washington.

A lawyer for the defendants, who were already sentenced to life in prison, did not immediately respond to a request for comment.

After the first round of convictions, Bryan could get parole after serving 30 years, while the McMichaels were denied any chance of parole.

The new convictions came after a judge rejected a plea deal the McMichaels reached with federal prosecutors, which led to the father and son each withdrawing their pleas.

U.S. District Judge Lisa Wood, a George W. Bush nominee, said she listened as family members urged her not to accept the deal, which would have seen the men serve years in federal prison before being moved to state lockup.

Assistant attorney general Kristen Clarke said the Department of Justice (DOJ) respected the court’s decision and had only entered the agreement after getting approval from Arbery’s family.

“What we got today, we wouldn’t have gotten today if it wasn’t for the fight that the family put up,” Cooper-Jones said on Tuesday. “What the DOJ did today, they was made to do today. It wasn’t because it’s what they wanted to do.”

“I cannot imagine the pain that a mother feels to have her son run down and then gunned down while taking a jog on a public street,” Garland responded. “My heart goes out to her and the family. That’s really all I can say about this.”