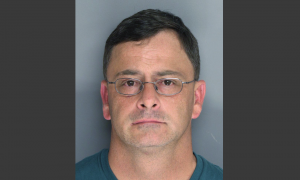 Police are investigating after three masked teenagers were found shot outside a Georgia home.

The male teenagers, who later died, were accused of trying to invade the home of a man in Atlanta, Rockdale County, according to ABC News. Police say the incident “could be a Stand Your Ground” case, the outlet reported.

Stand Your Ground is a term used to refer to a controversial law that allows people to use deadly force when they have a legitimate fear of “imminent death or great bodily harm.”

Reports of shots at a home on White Oak Court, Conyers, came through just after 4 a.m. on Sept. 16, the Rockdale County Sheriff’s Office said in a statement.

Police said when they arrived they found three young males with gunshot wounds and started to carry out first aid. Two of the teens were 16 years old, and the other was 15 years old.

One neighbor, Carlos Watson, told WSB-TV what they heard: “It was five shots and then it sounded like a handgun. Then I heard somebody have an assault rifle. And it was a slew of shots that came out.”

“Upon our arrival, the deceased was at the edge of a driveway and partially in the roadway,” Sheriff Eric Levett said at the scene, according to the ABC-affiliate. “The other young man was a little bit down the street, where it appears he was running.”

Police said that the three teens had come to the home and tried to rob three people in the front yard, ABC News reported.

Two Weapons At the Scene

The report said that one of the teens allegedly took out a handgun and shot the residents, before one shot back. Meanwhile, those whom the teens had allegedly tried to rob were not injured and none have been charged.

“[Deputies] did discover masks on the young men,” Levett told reporters. “That rose our suspicions.”

He added that two weapons were found on the scene but have not yet confirmed who they belonged to.

Levett said that a preliminary investigation suggests that the homeowner had acted in self-defense.

“It’s just a matter of verifying all the information that we have,” he said.

The homeowner who allegedly fired back is in his late 40s to early 50s and is a truck driver who owns a semi-automatic rifle and is highly protective of his mother, according to local reports. He has not been identified.

Anyone with information is asked to call the Rockdale County Sheriff’s Office.

“A person who uses threats or force … relating to the use of force in defense of self or others … has no duty to retreat and has the right to stand his or her ground and use force … including deadly force,” Georgia’s version of the law (pdf) states.