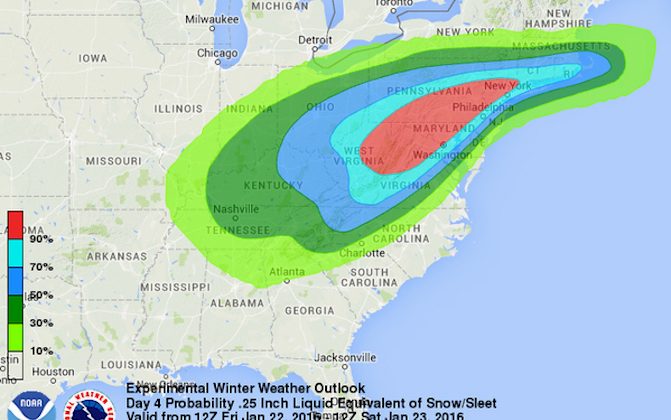 This image provided by National Oceanic and Atmospheric Administration's (NOAA) National Weather Service Weather Prediction Center shows an early computer model forecasting the chances of a windy, strong sleet-snow storm hitting the East Coast this weekend, Jan. 22-23, 2016. Meteorologists say tens of millions of Americans from Washington to Boston and the Ohio Valley could be walloped by an end-of-the-week snowstorm. (National Oceanic and Atmospheric Administration via AP)
US

3 Likely Scenarios for Eastern US Snowstorm

WASHINGTON—As a nor’easter eyes the eastern United States, the National Weather Service is warning of a “potentially paralyzing winter storm” at the end of the week for parts of the mid-Atlantic region, including the Baltimore and Washington metropolitan areas, where a blizzard watch has been issued.

— The NWS Weather Prediction Center says the most likely track brings the heaviest snowfall to eastern Kentucky, West Virginia, western Virginia, northern Maryland and southeast Pennsylvania, with 1 to 2 feet of snow. Significant icing is likely in parts of Kentucky, North Carolina and southern Virginia with possible ice accumulations around a half inch. New York and southern New England may see snow but the amount could vary greatly, even over small distances. Coastal flooding is possible during high tide along Long Island, New Jersey, the Delmarva peninsula and western shore of the Chesapeake Bay on Friday night and Saturday.

— Bruce Sullivan, senior forecaster for the NWS, said Wednesday night that models have been very consistent, and even though it’s two days out, Baltimore and Washington are likely in the “sweet spot” for a potentially paralyzing winter storm and life-threatening blizzard condition.

— If the storm moves more slowly and shifts to the south, areas such as New York City could be spared the heaviest snowfall totals.

— If the storm stays further west, there could be more sleet and maybe even rain in the Delmarva peninsula and southern New Jersey.