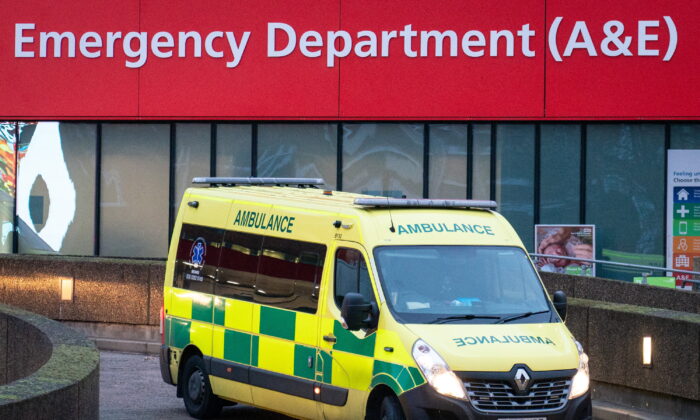 Less than two in five COVID-19 hospital patients in England are being treated primarily for the disease caused by the CCP (Chinese Communist Party) virus, commonly known as novel coronavirus, according to the National Health Service (NHS).

The latest figures show that there were 13,645 patients with COVID-19 in NHS England’s acute trusts on April 19, around 39.8 percent (5,434) were primarily treated for the disease, the lowest portion since the figures were published in June 2021.

The percentage of COVID-19 patients primarily treated for the disease was at almost 80 percent in June 2021. It remained largely stable until December 2021, with the figure dropping to around 75 percent, before starting a steep fall at around the same time the more infectious less severe Omicron variant was found in the UK.

In London, the percentage of COVID-19 patients primarily treated for the disease dropped to 26 percent on April 19 from almost 84 percent at the beginning of October last year.

All hospital patients who have tested positive for the CCP virus need to be treated separately from those who do not have the virus, regardless of whether they are in hospital primarily for COVID-19 or not.

But the growing proportion of patients who are in hospital with COVID-19 rather than for COVID-19 shows how the current wave of the virus has not led to the same sort of pressure on critical care as in previous waves.

A total of 296 patients in all hospitals in England were in mechanical ventilation beds on April 19, compared with 773 at the start of December—and well below the 3,736 recorded at the peak of the second wave on Jan. 24, 2021.

Separate figures published by NHS England on Thursday show that average daily admissions to hospitals of people testing positive for COVID-19 stood at 1,507 on April 19, down 21 percent week-on-week and the lowest number since March 14.

Admissions have fallen week-on-week in all regions.

According to NHS England, hospital trusts were asked to provide the “‘for’ and ‘with’ [COVID] split on a ‘best endeavours’ basis” as the differences are not always clear.

“For example research has shown that people with COVID are more likely to have a stroke (Stroke Association); in these cases, people would be admitted for the stroke, classified as ‘with’ COVID despite having had a stroke as a result of having COVID,” it noted.