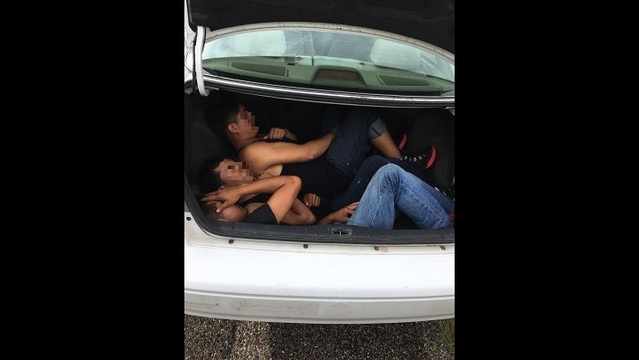 (Photo from U.S. Customs and Border Protection)
Crime and Incidents

Three illegal aliens were found in the trunk of a vehicle during an immigration inspection near Sonoita Station, Arizona, on July 20.

Tucson Sector Border Patrol agents went in to stop a 1998 Toyota Camry driving on State Route 83 to check the driver’s immigration status. The driver appeared to be traveling alone but was later revealed to be a smuggler.

During the vehicle inspection agents obtained consent to check the trunk and after opening, found three adult Mexican males who tried to enter America illegally, according to U.S. Customs and Border Protection.

The driver of the vehicle was a 56-year-old South Tucson woman who was arrested by the agents at the scene for smuggling. Agents then seized the vehicle.

The three Mexican nationals are currently being processed for violating immigration laws, according to the U.S. Custom and Border Protection.

Federal law allows patrol agents to charge any individual by complaint, a “method that allows the filing of charges for criminal activity without inferring guilt,” according to the U.S. Custom and Border Protection. The individual is presumed innocent until evidence shows guilt beyond a reasonable doubt.

Agents at the scene said upon further inspection of the Camry, they found no emergency trunk release, which could prove to be a safety hazard during the summer. Temperatures in Arizona can climb quickly.

Other safety hazards could include being crushed in a rear-end collision or being poisoned by carbon monoxide. Agents said riding in the trunk of a vehicle could be the same as giving yourself a death sentence.

More than 41,000 undocumented immigrants have been arrested since President Donald Trump was inaugurated in Jaunuary.