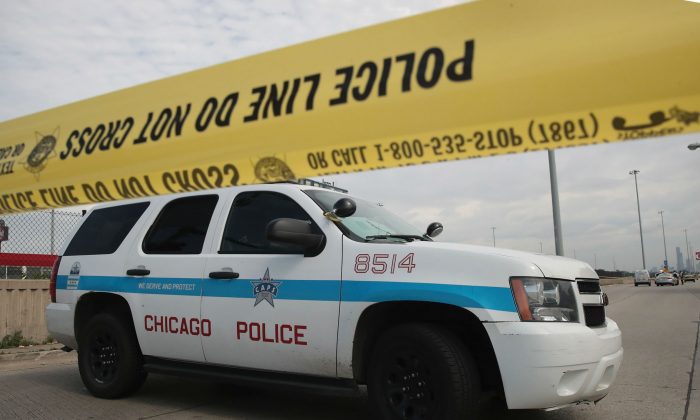 A police car in Chicago on June 30, 2017. (Scott Olson/Getty Images)
Crime and Incidents

Three young girls have been arrested and charged for the beating of a 15-year-old girl with special needs.

In a tweet, Chicago Police Department spokesman Anthony Guglielmi stated that the 13-,14-, and 15-year-old girls responsible for the beating face charges of aggravated battery and mob action reported CBS2.

According to police, the victim, now reunited with her family, had been missing for five days, and the incident is being investigated to determine whether or not the girl was sexually assaulted during her disappearance.

It has also been reported that the young girls responsible for the attack were considered to be friends by the victim.

According to NBC Chicago, Chicago Police Supt. Eddie Johnson told reporters, ”Our victim knew her attackers and the video gave me the sense that she felt she was among friends.

“It broke my heart to see this group of people turn on her and escalate into what we saw, which was a physical assault.

“There was some things going on that these young ladies wanted to her do that she… we’ll leave it at that for now,” Johnson added.

According to the Chicago Tribune, a video of the altercation was posted online by a friend of the victim. In the video the victim can be seen getting cornered and attacked by a group of young girls.

“This is beyond disturbing to watch and this young girl deserves far better,” Guglielmi wrote in a tweet.

“I know this won’t blow up since I’m a small account but please share and rt! I want justice for my friend, she didn’t deserve any of this,” the tweet went on to say.

Community activist Stringer Harris claims the young girls were attempting to lure the victim into participating in a sex act with a male. When the victim refused and threatened to call the police, she was attacked by the three girls.

“One of her friends hit her in the face, striking her in the head, that left lacerations on her forehead,” said Harris. “Another friend attacked her brutally and beat her and another gentleman was there as well.”

The victim is said to have went missing—for the five days—following the attack, police however, say they aren’t sure why the victim wasn’t reported missing sooner.

Three teenage girls have been charged after a viral video showed a 15-year-old girl with special needs being beaten and crying for help on the South Side earlier this week https://t.co/uWluUkcAP8

According to authorities the girl was found on the same Tuesday she was reported missing, when a friend spotted her on the public transit.

She was then taken to the police station, “The victim was interviewed and she did mention a couple of things aside from what was on the video,” said Chicago Police Officer Jose Jara.

She was later brought to Comer Children’s Hospital, where she was treated and released early Wednesday.

Update: Police: Girls were showing a special-needs teen how to flash gang signs before they started beating her https://t.co/PZ0mJ6LMTB

“It’s a shame, and she’s upset,” Harris said. “She’s still trying to figure this out.”

“She was heartbroken about this situation,” Harris added.