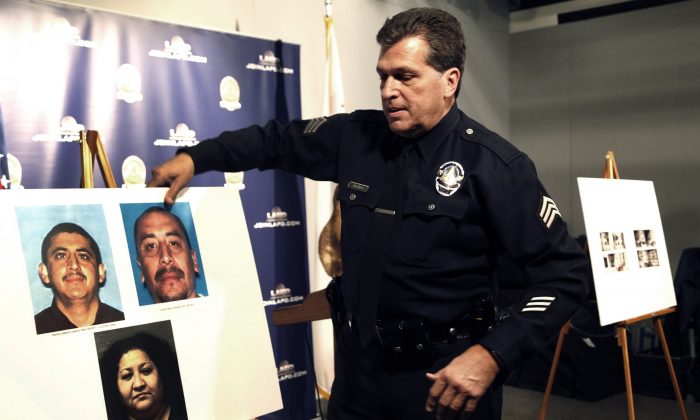 Los Angeles police Sgt. Jack Richter displays photos of arson suspects from a 1993 fire prior to a news conference in Los Angeles,] on Feb. 6, 2017. (AP Photo/Nick Ut)
Crime and Incidents

LOS ANGELES—Three alleged gang members who prosecutors say set a 1993 fire to retaliate against a building manager’s attempt to quell drug sales have been charged with murder in connection with the blaze that tore through a Los Angeles apartment building filled with poor immigrants, killing seven children, three women and two late-term fetuses.

Ramiro Valerio, 43, of Palmdale, and Joseph Monge, 41, of Montebello were arrested Feb. 3. Along with Johanna Lopez, 51, they were charged Tuesday with 12 counts of murder and other charges, according to the Los Angeles County district attorney’s office. The three were expected to be arraigned Tuesday afternoon, and it wasn’t immediately clear if they had attorneys who could comment on the allegations.

The May 3, 1993, fire was set as revenge after a new apartment manager tried to stop rampant drug dealing in the building, according to authorities. Prosecutors said that as the manager was moving into a second-floor apartment in the three-story, 40-unit apartment building in Los Angeles’ Westlake neighborhood, someone set her mattress—which was left in the hallway—ablaze, causing fire and smoke to spread throughout the apartment complex.

The building’s residents, nearly all of them immigrants from Mexico, El Salvador and Guatemala, tried to escape by jumping from windows and climbing down bed sheets tied to balconies. Neighbors also formed a human chain to pass down children from upper floors. Other children were dropped from balconies into waiting hands.

Prosecutors said the 10 people who were killed included: 24-year-old Olga Leon and her three children, ages 4 to 7; 29-year-old Alejandrina Roblero and her three young children who were between 6 and 11 years old; 21-year-old Rosalia Ruiz; and a one-year-old child, Lancy Mateo. Both Leon and Ruiz were pregnant when they died, prosecutors said. Court papers said two of the murder charges the suspects face relate to the women’s unborn fetuses.

Two men were charged in the 1990s in connection with the fire, but the cases against them were eventually dropped for a lack of evidence.

Prosecutors said Valerio, Monge and Lopez would be eligible for the death penalty if they are convicted, but prosecutors have not yet said whether they will pursue capital punishment in the case.