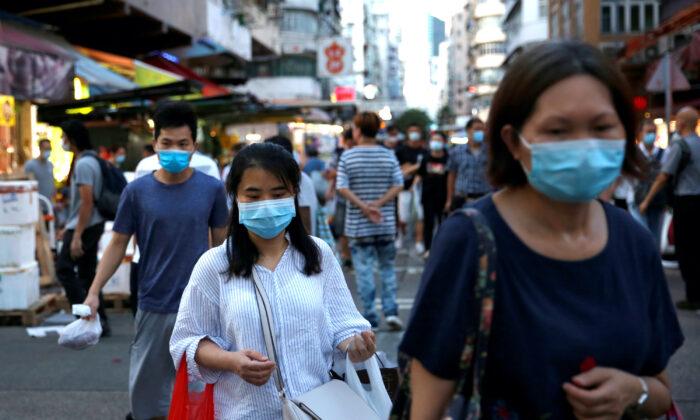 People wear surgical masks at a wet market following the COVID-19 outbreak at Sham Shui Po, one of the oldest districts in Hong Kong on July 17, 2020. (Tyrone Siu/Reuters)
Hong Kong

On March 8, a 71-year-old man in Hong Kong died four days after receiving his vaccine shot. The patient was reported to be in good health before the vaccination. This was the third death in Hong Kong following a CoronaVac injection.

It’s unclear whether the vaccine contributed to the deaths. Authorities have said they are investigating the causes of death.

The first known death in Hong Kong occurred on Feb. 28. A 63-year-old man passed away two days after his shot. On March 6, a 55-year-old woman died four days after her vaccination. Both had underlying health conditions.

Ronald Lam, the controller of the Center for Health Protection, said that as of 4 p.m. on March 7, there were a total of 45 cases of serious adverse reactions, another 16 non-serious cases were received, involving mainly headaches and fatigue.

Two people were referred to the ICU, and one of them was in critical condition.

However, rather than halt its rollout of CoronaVac, the Hong Kong government announced it would expand its priority vaccination efforts to seven categories of people, including school staff and registered construction workers—a total of 1.3 million residents.

Sophia Chan Siu-chee, the secretary for Food and Health, said on March 8 that Hong Kong’s Advisory Panel on COVID-19 Vaccines still held the view that the benefits of CoronaVac “outweigh the risks” and that the city’s vaccination program will continue to use China’s CoronaVac.

The adverse reactions following CoronaVac injections have deterred some Hongkongers from getting the China-made vaccine. The local government announced on March 1 that the number of appointments for CoronaVac was nearly 160,000. After the first death, the number of appointments on March 2 and March 3 plummeted to 18,000 and 12,300, respectively. It dropped even more in the next two days to the thousands only.

The government’s daily updates on its website for the number of scheduled vaccinations stopped on March 6.

In a March 9 radio interview, Patrick Nip Tak-kuen, Secretary for the Civil Service, mentioned that the initial vaccination rate exceeded 90 percent but by March 8, it had fallen to 72 percent, indicating that some citizens did not get their vaccination as scheduled.

Vaccines and the Economy

The Chinese Communist Party’s race to vaccinate China’s population has been slow. As of the end of February, China administered 52 million doses of the vaccine—less than 4 percent of the population.

Meanwhile, the United States—which has a population of more than 300 million people—has vaccinated 9.2 percent of its population.

“If vaccination is not ramped up, this could further delay the opening of China’s borders and weigh on economic growth in the coming years,” Louis Kuijs, head of Asia economics at Oxford Economics in Hong Kong, told the outlet.

Governments around the world, including China, are facing resistance from some people who are yet to trust the vaccines.

Previously, The Epoch Times revealed a set of January work reports from the health commission of one of the main urban areas of Shanghai. The reports contained survey data on locals’ willingness to take Chinese vaccines for COVID-19.

China has, in recent years, experienced a series of vaccine scandals that have hurt public confidence in drug safety.