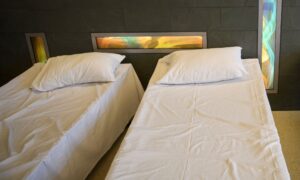 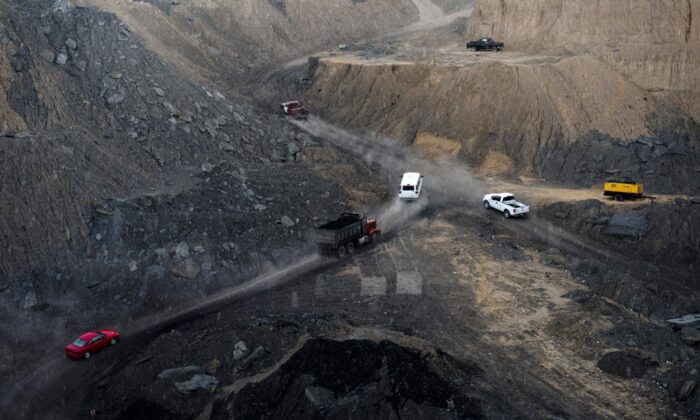 Miners with heavy machinery work in an opencast coal mine in Agujita, Coahuila State in Mexico, in a file photo. (Yuri Cortez/AFP via Getty Images)
Americas

MEXICO CITY—The bodies of two miners were pulled from a small coal mine in a northern Mexico border state by early Sunday, bringing to three the number confirmed dead in the flood and partial collapse of the shaft. Three miners remain missing, and search efforts continued.

The dead miners were found at the small coal mine in the northern Mexico border state of Coahuila, where there have been complaints for years about unsafe conditions at coal mines.

The federal civil defense office said rescuers had worked through the night.

Efforts have concentrated on pumping water out of the mine. The army dispatched a 28-member team that specializes in looking for victims in collapsed structures and it was using two trained dogs at the mine.

The Micarán mine, located in Muzquiz township, appears to be a type of deep, narrow, open pit with steep earth walls, with at least one tunnel at the bottom burrowing into the coal face. The area is about 80 miles (130 kilometers) southwest of Eagle Pass, Texas.

Coal mines in the area have been hit by deadly accidents in the past. An accident on Feb. 19, 2006, in the Pasta de Conchos mine in nearby Sabinas, Coahuila, killed 65 miners, but only two bodies were recovered.

Mexican authorities called off that search and closed the mine five days after the accident, arguing that it was unsafe due to toxic gas.

The Miguel Agustin Pro Human Rights Center published a letter from families of the miners killed in the Pasta de Conchos disaster, saying that coal mines in the area routinely violated safety codes.

The families said one of the bodies found at the Micarán mine was that of a miner who had complained about safety conditions there.

“We very much regret his death, because he was a brave miner who lodged a complaint against this mine in October,” the families’ group wrote in a statement. “He was trying to save his own life and those of his coworkers.”

The relatives’ group has reviewed conditions at a large number of mines since 2006 and reported that about 100 miners have died in mishaps since the Pasta de Conchos accident. In recent mine inspections, they said, they had found miners working in sneakers with no safety equipment, drinking water, or gas monitors.

“The rule continues to be that these mines operate in deplorable conditions,” the group wrote. “For decades, the mines have been allowed to operate without complying with the laws.”

Many of Coahuila’s small-scale mines have rough logs and tin roofing used to shore up tunnels. Miners descend atop crude coal buckets on cables pulled by car engines.

The issue is a key one for López Obrador, who has promised to get justice for miners’ families, while simultaneously increasing the amount of coal the government purchases to burn in power plants.

López Obrador wrote in his social media accounts that federal forces were aiding in the effort and said, “We hope the rescue will be positive for the relatives, and for everyone.”