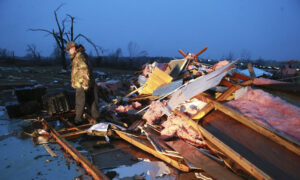 3 Dead as Suspected Twisters, Other Storms Batter the South
0 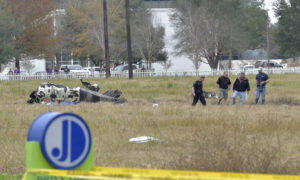 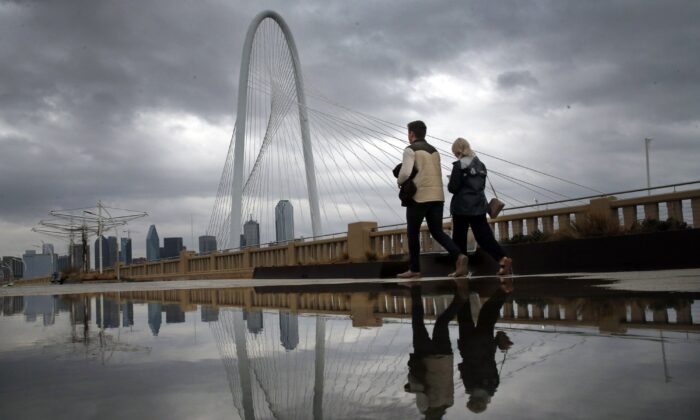 Clouds from a passing shower move across the Dallas skyline and the Margaret Hunt Hill Bridge on Jan. 10, 2020. (Tom Fox/The Dallas Morning News via AP)
US News

3 Dead in Louisiana as Severe Storms Sweep Southern US

DALLAS—Authorities in Louisiana said Saturday that at least three people have died in connection with a severe storm that is sweeping across parts of the U.S. Gulf Coast and Southeast.

The Bossier Parish Sheriff’s Office said on its Facebook page that the bodies of an elderly couple were found near their demolished trailer by firefighters. A search for more possible victims was underway.

The Sheriff’s Office also said the roof of Benton Middle School was damaged and “that water damage from the sprinkler system has flooded many rooms.”

In Arkansas and Missouri, tornadoes destroyed homes and also caused damage in Oklahoma.

The national Storm Prediction Center said Friday more than 18 million people in Louisiana, Arkansas, Texas, and Oklahoma were at an enhanced risk of storms Friday, including from strong tornadoes, flooding rains and wind gusts that could exceed 80 miles per hour, the speed of a Category 1 hurricane. The area included several major Texas cities including Dallas, Houston, and Austin.

8:20am – This band of snow/sleet moving through Denton and Gainesville is causing minor accumulations in North Texas this morning. Share your reports and photos with us! #dfwwx pic.twitter.com/5nSa7Oxmw5

Earlier in the afternoon, a tornado destroyed two homes near Fair Play, Missouri, about 35 miles northwest of Springfield. The Missouri State Highway Patrol said no injuries were reported.

Shortly before 3 p.m., a tornado stripped the shingles from the roof of a home near Tahlequah, Oklahoma, about 60 miles southeast of Tulsa. No injuries were reported there either.

What the NWS described as “a confirmed large and extremely dangerous tornado” roared through parts of Logan County, Arkansas, about 45 miles east of Fort Smith on Friday night.

At least three homes were destroyed by the Arkansas tornado, said Logan County Emergency Management Coordinator Tobi Miller, but no injuries were reported. Downed trees and power lines were widespread, she said.

Miller said the tornado skirted her home in Subiaco, Arkansas. She said she heard but couldn’t see the rain-wrapped twister in the dark.

Ahead of the storms, Dallas’s Office of Emergency Management asked residents to bring in pets, outdoor furniture, grills, “and anything else that could be caught up in high winds to reduce the risk of flying debris.”

Such strong winds are a key concern in an area at greatest risk: A zone that includes parts of Texas, Oklahoma, Louisiana, and Arkansas, the Storm Prediction Center warned. Weather service meteorologists in northern Louisiana said that such a dire forecast for the area is only issued two to four times each year, on average.

In Texas, Gov. Greg Abbott said boats, helicopters, medical, and rescue teams had been placed on standby in case they are needed.

“I ask that all Texans keep those in the storm’s path and all of Texas’s first responders in their prayers as they deal with the effects of this storm,” Abbott said in a statement.

Wicked weather also will pose a threat to Alabama and Georgia as the system moves eastward on Saturday, forecasters said.

“At the state level, we continue to closely monitor this storm system, while making all necessary preparations,” Ivey said in a statement. “I encourage all Alabamians to do the same, stay weather aware and heed all local warnings.”

On Alabama’s Gulf Coast, Baldwin County canceled school activities including sporting events for Saturday. The weather service warned of flooding and the potential for 10-foot-high (3-meter-high) waves on beaches, where northern visitors escaping the cold are a common sight during the winter.

Heavy rains also could cause flooding across the South and part of the Midwest.

Many streams already are at or near flood levels because of earlier storms, and heavy rains could lead to flash flooding across the region, forecasters said. Parts of Arkansas, Tennessee, Mississippi, Missouri, Illinois, and Indiana were under flash flood warnings or watches on Saturday.

By Terry Wallace and Jeff Martin