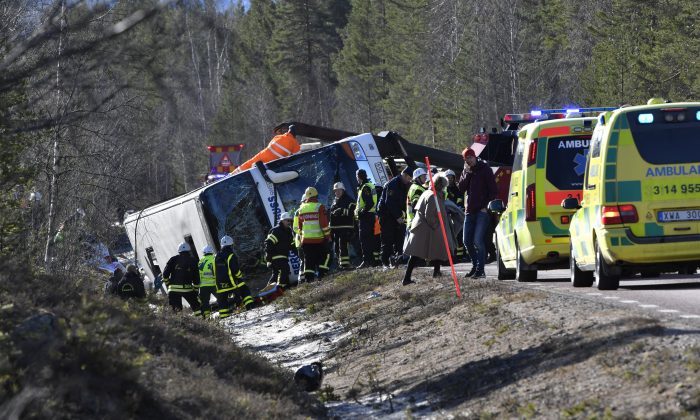 Emergency services and ambulance at the scene of a bus accident, on the E45 between Sveg and Fagelsjo in Sweden on April 2, 2017. (Nisse Schmidt/ TT via AP)
International

The 52 students were on a school trip to a ski resort with seven adults, including the driver, when the accident occurred on a main highway south of Sveg, a small town 430 kilometers (260 miles) northwest of the capital, Stockholm.

The accident, on a straight, empty road in good weather, occurred at about 7 a.m.—nine hours after the two-story bus left the southwestern town of Skene. Police said they did not know the cause of the accident, where the bus apparently skidded off the road into a ditch and fell on its side. Earlier reports said the road had been icy, but police could not confirm the details pending an investigation.

The father of Stina Almqvist, one of the students on the bus, said he was awakened by a call from his “panic-stricken” daughter.

“She just screamed and screamed,” Fredrik Almqvist told the Expressen tabloid. “I can still hear her screams.”

Friends of the students from Angskolan high school in Skene gathered at the school on Sunday, where the Swedish flag flew at half-staff.

Some gathered around a large rock in the schoolyard, placing candles, flowers and a teddy bear to commemorate the victims of the accident and remember friends who were involved. A short note placed nearby said, “warm thoughts.”

Police, crisis workers and church members were also present at the school.

“We know many of the youth,” Goran Landgren, a priest from a nearby church in town. “This has touched us and deeply upset them (students) all.”

Landgren told Swedish national news agency TT that the community still was waiting to learn who was killed.

Prime Minister Stefan Lofven said the accident “leaves me and the whole country in sorrow,” and other leading politicians offered their condolences.