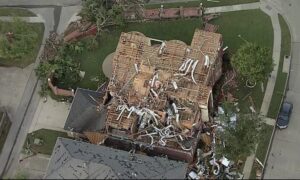 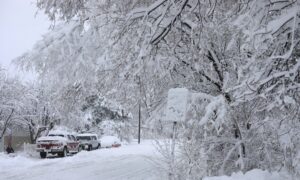 Winter Storms Expected to Bring Snow Across US
0 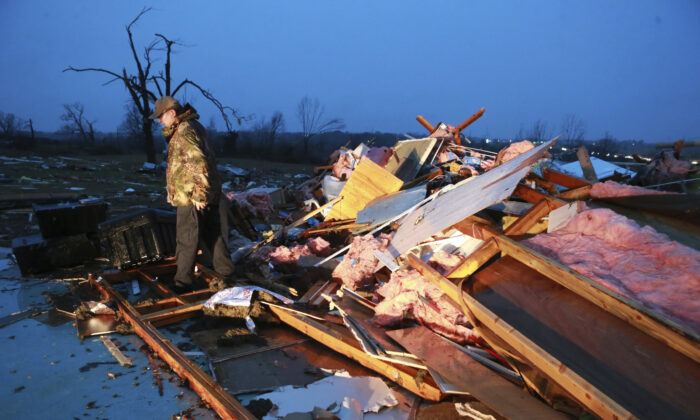 Carl Estes searches for books and other items from his church on County Road 911 that was completely destroyed by a tornado in Guntown, Miss., Monday, Dec. 16, 2019. (Thomas Wells/The Northeast Mississippi Daily Journal via AP)
US News

3 Dead as Suspected Twisters, Other Storms Batter the South

Three people are confirmed dead and several others have been injured as powerful storms smashed into buildings, downed trees and left a trail of destruction around the Deep South on Dec. 16.

One person was killed in a suspected tornado strike on a Louisiana home, and two others were confirmed dead after another storm hit around a community about 55 miles west of the north Alabama city of Huntsville.

Two people were killed and at least four others were injured when another apparent tornado smashed into Town Creek, Alabama, the community’s police chief, Jerry Garrett, told a news conference late Monday. Officials there said houses or mobiles were destroyed.

Details remained skethcy on the extent of damages as darkness and downed trees and lines hampered the work of first responders.

The storms triggered multiple tornado watches and warnings over a span of several hours Monday. Elsewhere, some cities opened shelters as a cold front collided with warmer air over northern Gulf Coast states and temperatures were expected to plunge. The National Weather Service said the severe weather threat could last into the early hours Tuesday.

The Louisiana death Monday was attributed to an apparent tornado that struck a residential area in Vernon Parish, but details were not immediately available, said Chief Deputy Calvin Turner. He said authorities feared others could be hurt in the area since crews were still trying to reach hard-hit areas where downed trees and power lines blocked roads.

“We’ve got damage at lots of places. We’ve got a church where the fellowship hall is torn all to pieces. Some homes are hit. Right now we’re having trouble just getting to places because of trees that are down,” Turner said.

Children in a church school were moved to the church before the tornado ripped off the school’s roof, said Cpl. Wade Bourgeois, spokesman for the Alexandria Police Department. Among the hardest-hit spots was the Johnny Downs Sports Complex, which he said may have suffered “total damage.”

“Fortunately we have no reports of any deaths or serious injuries,” he said of the Alexandria area.

Bourgeois said some mobile homes and a few houses were damaged. Downed power lines left people stuck in homes or other buildings until rescuers could reach them, Bourgeois said.

“They weren’t pinned or dangerously trapped,” he said.

Meteorologist Donald Jones of the National Weather Service office in Lake Charles said it appeared the twister that hit part of Alexandria also struck near the town of DeRidder on an “absolutely ridiculous” path estimated at 63 miles (101 kilometers) long.

“I don’t know what our records for the longest total in this area is, but that’s got to be pretty damn close to it,” he said.

Jones added storm surveyors would later have to confirm whether the storm went the entire distance along the ground or touched down in spots along the way.

“We’ve got multiple houses with severe damage and a few houses that are completely destroyed,” he said. The number wasn’t known Monday night because crews couldn’t get to them all — downed trees tangled with power lines blocked county roads and state highways, he said.

McCurley said damage was spread across the county, which adjoins the southeast Louisiana state line.

Four counties eastward, seven women were taken to a hospital from a heavily damaged group home in Sumrall, Mississippi,WDAM-TV reported. Damage on the men’s side of the Douglas Graham Group Home was less severe than on the women’s side, Lamar County emergency management director James Smith said. The number and extent of the women’s injuries was not clear.

That tornado cell sprang up in Tangipahoa Parish, Louisiana and went through Washington Parish on its way into Mississippi, said meteorologist Phil Grigsby of the National Weather Service office in Slidell.

The Storm Prediction Center reported two other people suffered minor injuries from flying debris after storms moved into Mississippi, and multiple trees fell atop homes and vehicles in Edwards, east of Vicksburg. Schools were opened as shelters as forecasters began issuing tornado warnings in north Alabama.

In Guntown, Mississippi, near Tupelo and about 260 miles (420 kilometers) north-northeast of Amite County, an apparent tornado destroyed a church and damaged dozens of homes.

Pastor Carl Estes searched through the debris of Lighthouse Baptist Church for books, photos or any other salvageable items, the Northeast Mississippi Daily Journal reported. The storm razed the church building to its foundation. Estes said no one was inside when it was demolished.

Church member Shane Keith told the newspaper he rushed to Lighthouse Baptist once the storm passed to fined the pews tossed around the hillside where the church once sat.

“I wanted to cry, I really did” Keith said. “I mean, I just got baptized last year and this means a lot to me, this place right here.”

Mississippi State Sen. Chad McMahn of Guntown said he toured a subdivision where an estimated 35 homes had been damaged.

As the storm system pushed into Alabama on Monday evening it toppled trees and power lines and kicked up more suspected tornadoes. Damage was reported in north Alabama when a possible tornado touched down. The Colbert County Emergency Management Agency said buildings were damaged in the Colbert Heights area and that multiple roads were blocked because of debris.

About 20,000 homes and businesses were without power in Louisiana and Mississippi, and outages could spread as storms moved eastward.

Tornado watches extended from the Gulf Coast as far north as southern Tennessee, and additional watches and warnings were likely.

Forecasters said tornadoes, hail and winds blowing at 70 mph (115 kph) posed the greatest threat as a cold front moved across the region in an easterly direction. Storms could last until early Tuesday in the eastern areas, forecasters said.

Monday was the 19th anniversary of a Southeastern tornado outbreak that produced a twister that killed 11 people in Tuscaloosa, Alabama. Storms on Dec. 1, 2018, spawned more than two dozen tornadoes in the Midwest.

By Jay Reeves and Janet McConnaughey