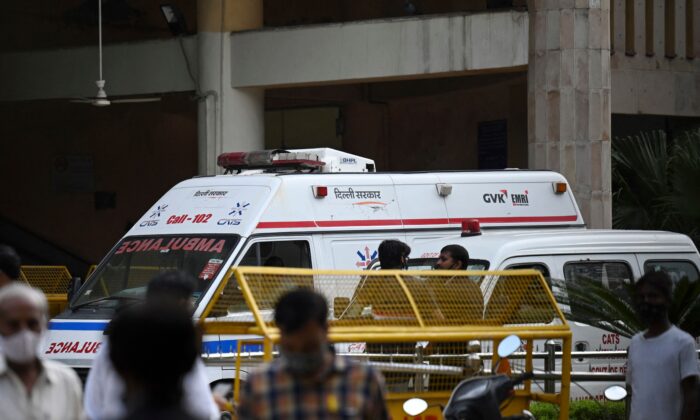 An ambulance is seen inside the Rohini court in New Delhi, India, on Sept. 24, 2021, after a notorious Indian gangster was killed by gunmen dressed as lawyers in a bloody shootout in a courtroom where three people died. (Money Sharma/AFP via Getty Images)
Asia & Pacific

Gunmen dressed as lawyers started shooting inside a courtroom in the capital of India on Friday, killing a suspected gang leader and also injuring several others, police said.

The two assailants involved in the incident allegedly belonged to a rival gang of 30-year-old Jitender Gogi, a notorious New Delhi gangster who was facing murder charges.

“Two from rival gang opened fire at Jitender Gogi inside the court,” New Delhi Police Commissioner Rakesh Asthana told NDTV. “That [is] when police retaliated and killed those two assailants.”

“The police acted swiftly and killed both the assailants,” Asthana added. In total three people are dead, including Gogi, who died later in a hospital after being shot multiple times, the official said.

Authorities haven’t released information on how the apparent gang members managed to bring weapons inside the courtroom.

Gogi was arrested in April 2020 after being involved in a series of murders, dozens of extortions, violent robberies, and carjacking cases in and around New Delhi, The Times of India reported.

Video images captured by people in the court premises in Rohini, western Delhi, showed people running for cover while shots rang out.

Arun Kumar, an official at the Rohini court, said lawyers should be given a special ID card to reduce the risk of impersonation.

The shooting has raised concerns about the security in Indian courts and whether metal detectors were working.

“The question on whether the metal detectors were not working in the court premises is a matter of investigation and I cannot comment on that at the moment,” Asthana told NDTV. “We are already investigating the case and we shall not spare anyone who is involved in this shootout. No one will be spared.”

Sanjeev Nasiar, President of the Delhi Bar Association, said lawyers would stay away from work on Saturday and review the security measures in courts.