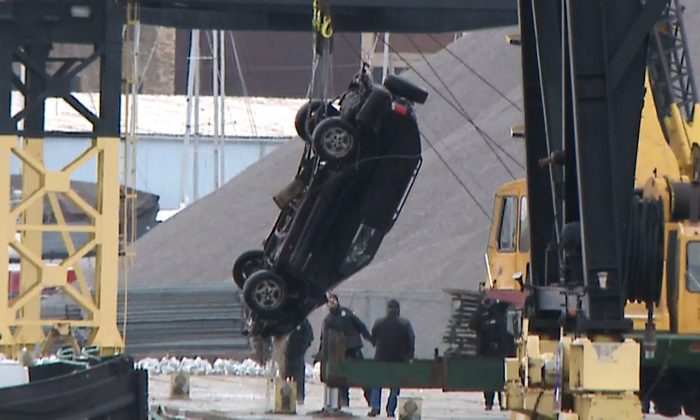 WISN-TV shows authorities pulling out an SUV from the Kinnickinnic River, a day after it crashed into the river during a police chase on Dec. 31, 2018. (WISN-TV/AP)
Crime and Incidents

MILWAUKEE—A toddler, her young mother, and a man died when their vehicle drove into a frigid river while being chased by Milwaukee police officers who suspected they were involved in two armed robberies.

Surveillance video shows the vehicle speeding and the driver losing control on the night of Dec. 31, before the SUV crashed into the Kinnickinnic River. It’s unclear who was driving the vehicle.

Sgt. Sheronda Grant, a police spokeswoman, said an officer tried to stop the vehicle, a black Chevy Trailblazer, because it matched the description of a car involved in two separate armed robberies earlier in the day. When the car fled, the officer chased after it.

The body of the toddler’s 19-year-old mother, Shannon Nehmer, was recovered from the water on Dec. 31 but she was pronounced dead at the scene. Divers found the bodies of the 2-year-old girl, Annamelia Hernandez, and 29-year-old Charles Barefield on the afternoon of Jan. 1, after the SUV was removed from the water.

Capt. William Beauchene, who oversees the department’s robbery division, said the vehicle was submerged in 30 feet of water and divers had to contend with low visibility.

Autopsies were scheduled for Jan. 2, according to the Milwaukee County Medical Examiner’s Office.

Beauchene said the first robbery happened at about 7 p.m. on Dec. 31, when a man who was checking fluids under his car was approached by people who’d gotten out of a black Chevy Trailblazer. The man said they demanded money at gunpoint and he was struck in the face before one of the suspects took his phone and everyone left.

About 25 minutes later, two other people were robbed at gunpoint, Beauchene said. In both robberies, the victims said two men and a woman were involved.

Police said they recovered the gun used in the robberies and have arrested the third suspect in the case, but have not released his name while charges are pending. He was not in the SUV during the police chase.

Police said it’s probable the toddler was in the car during the robberies, but they don’t know for certain.

Kristin Nehmer, who said she is the sister of the woman who died, told WTMJ-TV that she was having difficulty understanding why her sibling was fleeing police with her young daughter in the vehicle.

“I can’t imagine why she would have her daughter with her when she is doing things like that. That’s the hardest part,” Nehmer said. “She had a really good heart. She made a bad decision, but she was 19.”

In Sept. 2017, Milwaukee Police expanded the guidelines for when officers can initiate high-speed vehicle pursuits after public outcry over police not chasing reckless drivers. From 2010 until the guidelines were expanded, officers were only allowed to chase drivers suspected of committing a violent felony—a directive put in place after four bystanders were killed during police chases.

Now, in addition to violent felonies, police can pursue vehicles that “present a clear and immediate threat to the safety of others,” according to the guidelines, as well as when a car is being used for drug dealing.

The Wisconsin State Patrol is investigating the crash and whether adverse road conditions or drugs played a role in the deaths.

Grant urged drivers suspected of a crime to stop for police instead of fleeing.

“If not, they place their lives and the lives of others at risk,” she said.