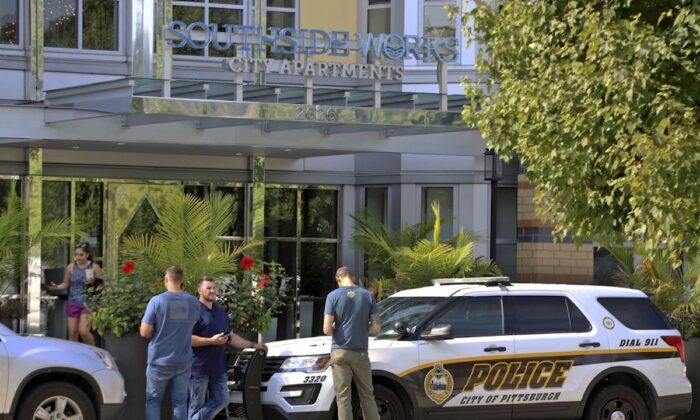 Pittsburgh police investigators gather outside an apartment building on the city's South Side where police say multiple people are dead and others are hospitalized in what they're calling a "medical situation" in Pittsburgh, Pa., on Sept. 22, 2019. (Gene J. Puskar/AP Photo)
Crime and Incidents

At least three people died and four were hospitalized in Pittsburgh after an undisclosed “medical situation.” The victims were wearing orange wristbands.

In a statement on Sept. 22, Pittsburgh Police said they are investigating the case.

Five of the victims were discovered inside an apartment, one was discovered in an elevator, and the other was found on the street, Pittsburgh officials said in a statement. It’s not clear where the other two were found.

Police are investigating a medical situation on the South Side:https://t.co/gOKLmS39lB pic.twitter.com/G51ldRgrZl

Police said all of the victims were wearing orange wristbands.

“All of the victims are wearing orange paper bands on their wrists,” police said in a statement.

Police said they asked about information about an event or party where orange wristbands were being used.

At around 7:30 a.m. Sunday, police said they were responding to the incident, CBS Pittsburgh reported.

The conditions of the victims hospitalized range from serious to critical condition, officials said, CNN reported.

The report, citing the city’s Public Safety director, said that some of the victims were found in Southside Works City Apartments.

Police are investigating into the possibility that the deaths and hospitalizations were due to drug overdoses, ABC News reported. But police said no drug paraphernalia was discovered in the apartment.

The South Side Flats area, where the victims were discovered,  includes a number of bars, restaurants, and stores, USA Today noted.

One of the victims was 33 years old, and the others are around the same age, the report said.

Police didn’t say what the cause of the death was.

Anyone who has information about the party or event they attended should call the police at 412-323-7141.