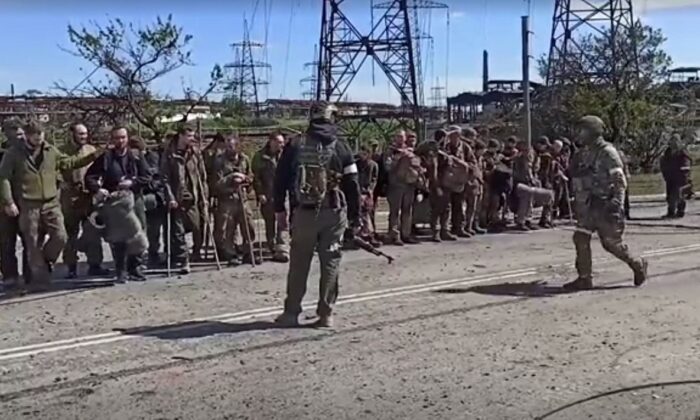 Ukrainian soldiers who had been holed up in the Azovstal steel plant leave Mariupol, Ukraine, on May 18, 2022. (Russian Defense Ministry via Reuters/Screenshot via The Epoch Times)
Russia-Ukraine War

3 Britons Captured in Ukraine Put on Trial for Being Mercenaries

Three men from the United Kingdom are going on trial in Russian-occupied eastern Ukraine accused of taking part in the war as mercenaries.

John Harding, Dylan Healy, and Andrew Hill were captured by pro-Moscow forces in Mariupol and will be tried by the Supreme Court of the Donetsk People’s Republic, along with Mathias Gustafsson, a Swede, and Vjekoslav Prebeg, who is from Croatia.

The Russian news agency, Tass, claimed the five were “members of the Azov nationalist battalion and other armed formations” fighting to defend Mariupol from the Russian advance.

Mariupol is part of the Donetsk People’s Republic, a pro-Russian state which declared independence from Ukraine a week before President Vladimir Putin ordered the invasion.

Healy, who is 22, is believed to be an aid worker from Cambridgeshire, but little is known about Harding and Hill.

In April, Russian television showed a video of a man with an English accent who said he was Andrew Hill from Plymouth.

Man May Have Fought in Syria

Tass claimed Harding, who is 60, had fought with Kurdish guerrillas in the conflict in Syria.

Last month the same court sentenced two British men, Aiden Aslin, 28, and Shaun Pinner, 48, for being mercenaries, but the UK’s Foreign Office called them “sham judgements” and the European Court of Human Rights ordered Moscow not to allow the sentences to be carried out.

A Foreign Office spokeswoman said: “We condemn the exploitation of prisoners of war and civilians for political purposes and have raised this with Russia. We are in constant contact with the government of Ukraine on their cases and are fully supportive of Ukraine in its efforts to get them released.”

Mariupol, a port on the Sea of Azov—a large inlet of the Black Sea which separates Crimea from Russia—was the scene of fierce fighting earlier this year.

Ukrainian forces, including the Azov Battalion—a far-right unit which until May wore a neo-Nazi symbol on its uniforms—fought off the Russian advance but were encircled and eventually forced to surrender on May 17.

The trial comes as the Russian foreign ministry issued a list of 39 individuals, including Labour Party leader Sir Keir Starmer and former Prime Minister David Cameron, who were subject to sanctions and banned from entering Russia.

Moscow said the action was in retaliation for UK sanctions issued against various Russian ministers, officials, and oligarchs.