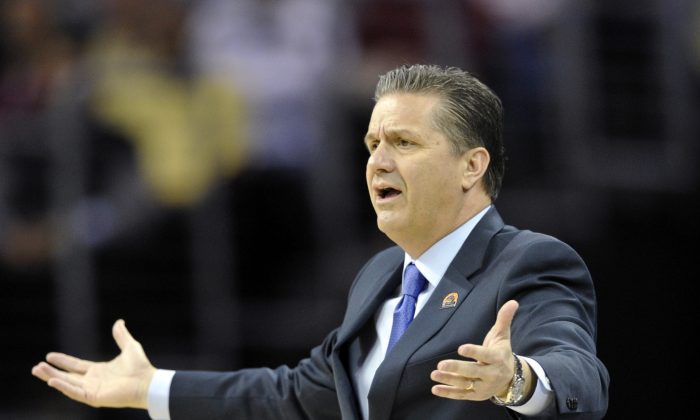 University of Kentucky coach John Calipari has been tabbed as wanting to get back into the NBA, and linked to the only professional team he’s coached–the Nets.

What other teams would he likely do well coaching?

Randy Wittman is on the hot seat and Calipari’s stock will be better than ever after this tournament, especially if Kentucky wins the championship. If the Wizards falter in the playoffs and Wittman gets sacked, who better to replace him?

Calipari would make sense on the Wizards because he’s adept at offensive concepts, which the Wizards have struggled with under Wittman, tailored toward the new-look basketball of three-pointers and inside shots over mid-range jumpers.

Wall has stuck behind Wittman but a coaching change is ultimately the owner’s choice, and Wall would almost certainly support Calipari if he was installed as the new coach. The rest of the team largely follows Wall’s lead.

Here’s another case where the team is perhaps struggling more than they should and Calipari has an “in” with the current star player.

Anthony Davis also played one season under Calipari at Kentucky. Davis is undoubtedly the best player on the team, and management will continue making a push to make the playoffs to help convince Davis to stick around after his current contract expires.

Calipari also coached Tyreke Evans when they were at the University of Memphis. Evans is one of the other top players on the team.

Monty Williams is a divisive figure in New Orleans, with many supporters but also many detractors. Since the Pelicans are likely missing the playoffs again this season, Williams and general manager Dell Demps could get fired.

Lionel Hollins isn’t necessarily on the hot seat, and would be hard to fire with two seasons guaranteed after the current one. This replacement might be more realistic for the following offseason.

Calipari, 56, coached the Nets for two seasons in the late 1990s. He was fired early in the third season.

“He desperately wants it,” a front office official told North Jersey about coaching again. “He won’t say it out loud. The NBA is the only place he’s ever failed and it drives him nuts. He’s not the same guy he was then. He came to the NBA and he wasn’t ready. He’s ready now.”

ESPN claims that Calipari still asks associates, “Can you believe I got fired?” Calipari still reportedly has ties with the Nets and could utilize them to become the team’s head coach.

There’s sure to be at least three or four open coaching positions after this season–including the guaranteed openings in Denver and Orlando, and likely openings in Washington and Chicago–and Calipari could find himself the most-sought after coaching candidate.

“Calipari could stand among the most coveted NBA free agents this spring, and chances are owners will throw offers of obscene money and unlimited power at his desire to right his Jersey wrongs,” ESPN’s Ian O’Conner wrote.

O’Conner says that Calipari will likely succeed if he takes another shot at the NBA, because he’ll come in with lessons learned during his time with the Nets and the years back in college since then. For instance, Calipari passed on drafting Kobe Bryant because Bryant’s agents said Kobe would play in Europe if Calipari drafted him, the type of move he wouldn’t make now.

Calipari also won’t be as desparate, and has much better name recognition. With stars around the NBA from Kentucky, including Davis, Wall, and DeMarcus Cousins, Calipari is known as a gifted coach and would be given a fair shake by most players around the league.