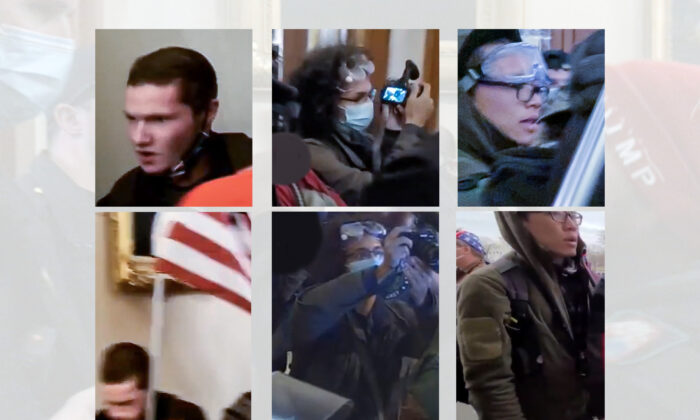 The FBI removed the photos of these three witnesses to the shooting of Ashli Babbitt from its Most Wanted list. (Graphic by The Epoch Times)
US News

Three witnesses who were in the hallway outside the Speaker’s Lobby of the U.S. Capitol when Ashli Babbitt was shot were once wanted by the FBI, but their photos have disappeared from the FBI’s January 6 Most Wanted page.

The men, including one who tried to administer first aid to Babbitt while she lay bleeding on the floor, were initially listed on the most wanted page on April 16, 2021. They were assigned numbers 310, 311, and 312.

On April 29, sometime after 6:45 p.m., their photos were scrubbed from the FBI list, according to an archived version of the FBI.gov website stored by the Wayback Machine at the Internet Archive. It is not clear why the photos were removed.

It has been the FBI’s practice to leave photos on the page and label them with a red banner that says “ARRESTED” any time a person is taken into custody.

One of the three men removed from the FBI list is a journalist who has covered riots and unrest around the country, according to journalist Tayler Hansen, who stood next to the man in the hallway on Jan. 6.

“He is media. He’s a photojournalist,” Hansen told The Epoch Times.

“Right as she got shot, he was the only one that reacted, and he immediately reached for his medical bag,” Hansen said. “He had a med bag on him, and started digging in it.

“He was the one who told me to grab a flashlight. He told me to turn my flashlight on so he could find her wounds,” Hansen said. “He was trying to help Ashli throughout the whole thing. He was one of the people the cops told to stop rendering medical aid to her.”

The man told Hansen he had substantial emergency medical training and carried a first-aid kit in his backpack.

“The way he handled that situation, I’ve never seen anything like it. He knew exactly what to do. He was the first one to react out of everybody,” Hansen said.

After a few minutes, police ordered everyone to move away from Babbitt so they had room to render proper emergency medical care.

The man has covered rioting in Portland and was present in Kenosha, Wis., the night Kyle Rittenhouse shot three men in self-defense during rioting over the police shooting of a black man armed with a knife in the summer of 2020, Hansen said.

“I can imagine he’s seen some stuff and dealt with something like that in the past and that’s why he was so level-headed compared to everyone else in that room,” Hansen said.

One of the other men removed from the FBI Most Wanted list is a still photographer, Hansen said. The third man, who carried a United States flag in the Speaker’s Lobby hallway, was among the first people to leave the area after Byrd shot Babbitt.

“I’d like an explanation as to why they’ve been removed,” Babbitt told The Epoch Times. “If there’s nothing nefarious, then that shouldn’t be a problem. The silence is, and has been, deafening.”

The Epoch Times contacted the U.S. Department of Justice regarding the three men, but did not receive any response.

This was not the first time a wanted person was removed from the FBI’s Jan. 6 Most Wanted list.

A few days after the riot, the FBI placed a photo of Ray Epps on a “Seeking Information” poster, asking the public’s help identifying those who breached the Capitol. He was listed as Photograph #16. That photo has since been scrubbed from the FBI website. There is no longer a No. 16 on the list, which now skips from Photograph #15 to Photograph #17.

Epps is seen on multiple videos on Jan. 5 and Jan. 6, encouraging Trump supporters to go into the U.S. Capitol before and after President Donald Trump’s speech. Epps has not been arrested or charged but met twice with the Congressional Jan. 6 select committee. His attorney has denied that Epps was an FBI informant or government agent.

An analysis by The Epoch Times of footage from four videographers in the Speaker’s Lobby hallway indicates only about 25 percent of people present when Babbitt was shot have been identified by the FBI or charged by the U.S. Department of Justice.

Twelve of the 55 people who were close enough to see and hear the shooting face charges for their involvement at the Capitol on Jan. 6, records show. They are among the more than 725 people arrested by the FBI in nearly every state on charges stemming from Jan. 6.

Less than one-third of the 55 are listed as wanted by the FBI. The rest do not appear to be among the nearly 1,560 people on the FBI’s Jan. 6 Most Wanted website. Nearly 70 percent remain unidentified, more than a year after the fact.

Analysis of more Jan. 6 video shot inside the historic Columbus Doors showed at least five people who ended up in the hallway outside the Speaker’s Lobby first accessed the Capitol through the Columbus Doors.

Surveillance video shows a protester—the FBI alleges it is George A. Tenney III— unsuccessfully tried to open the inner Columbus Doors from the inside by pushing his shoulder against them. When that failed, he turned around and appeared to be listening to someone off-camera. He then returned and was able to open the left door.

Police rushed in and fought to stem the flow of protesters into the Rotunda. A high-pitched entry alarm rang. Protesters forced their way past two police officers at the door. “Open the other door!” someone boomed off camera.

A female officer in riot gear was thrown to the ground to the left of the open door. A few protesters went to help her up, but another officer rushed and warned the protesters, “Get back! Get back!” The female officer was helped to the Rotunda, where she was seen leaning over with her hands on her knees.

Back at the doors, a protester ranted at a police officer guarding the inside of the Columbus Doors.

The officer asks the man, “You serve your country?”

“Yeah I did, for five years, and that’s a poor excuse!”

One of the men the Babbitt family is most interested in identifying is known online as #RedOnRed.

He is seen on video in numerous places on the Capitol grounds on Jan. 6. On the ground level, he launched a long 2-by-4 through a window. On his way to the Speaker’s Lobby, he is seen doing martial arts kicks into wooden office doors. He was standing to the left of Babbitt when she climbed into a broken window and was shot.

“Thank you,” the officer replies.

“You’re welcome. We’re not the enemy.”

#RedOnRed also appears on video by John Sullivan taken after Babbitt was shot.

He approaches the camera and said, “It’s the second guy on the left shot her.”

Sullivan replied, “Nobody else had a gun,” to which #RedOnRed said, “It’s the second guy on the left.”