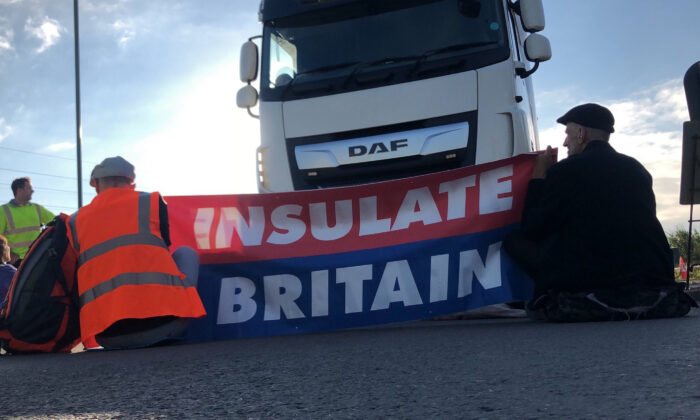 Three people have been arrested on suspicion of orchestrating a climate protest on the UK’s busiest motorway on Wednesday, the Metropolitan Police said.

The Met said that it also made 14 arrests for obstructing the M25. So far at least 88 people are known to have been arrested by UK police for Wednesday’s protests, during which activists blocked several junctions on the motorway.

“We consider their actions to be unreasonable and unsafe highway obstruction and we will respond as quickly as possible and robustly to any incidents of this nature,” the force said in a statement.

The protests were organised by campaign group Insulate Britain, which is demanding government action on home insulation.

Activists stopped traffic by sitting on the road on several sections on the M25 shortly after 8 a.m on Wednesday. Stranded motorists beeped their horns. Videos posted on social media showed angry drivers remonstrating with the activists.

“These actions are not only highly disruptive to those going to work and transporting vital goods, but are putting lives at risk on a busy motorway. Not to mention the resulting traffic delays will only add to vehicle emissions,” he said.

Insulate Britain said that 89 of its members took part in the demonstration.

In a statement, the group demanded “credible action” from the UK government on home insulation.

“Proper jobs for hundreds of thousands of people to start the first real step—to insulate all the homes of this country—which, pound for pound, gives us the biggest reduction in carbon emissions. It is a total no-brainer and yet this government refuses to get on with the job. This is criminal negligence.”

A protest by the same group on Monday blocked five junctions of the M25, leading to tens of thousands of drivers being stuck in huge queues of traffic and dozens of arrests.

However, it comes as a new policing bill, which aims to stymy precisely this kind of disruptive tactic, starts to make its way through Parliament.