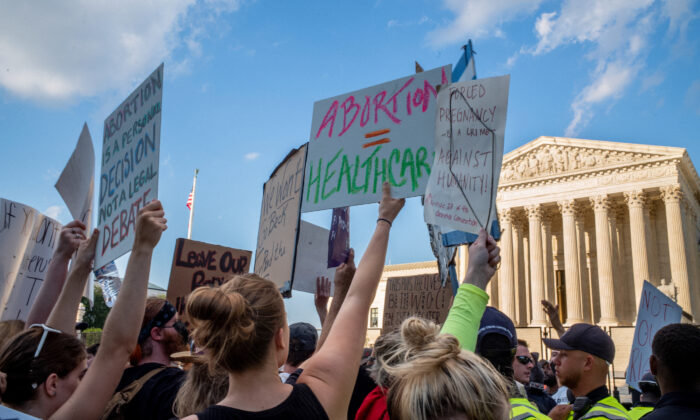 Two people have been arrested following protests at the Supreme Court and another for disrupting traffic by protesting atop a nearby bridge over the court’s majority decision to overturn Roe v. Wade and Planned Parenthood v. Casey, which has sent legislative powers for abortion access back to the states.

The two were arrested for the destruction of property, U.S. Capitol Police (USCP) said on Twitter on June 25. They allegedly threw paint over the fence outside the Supreme Court building.

On June 24, the Supreme Court overturned Roe v. Wade, a seminal 1973 ruling that largely legalized abortion nationwide, following a 5-4 vote. The court also ruled 6-3 to uphold a Mississippi law that bans abortion after 15 weeks of pregnancy.

“Roe was egregiously wrong from the start. Its reasoning was exceptionally weak, and the decision has had damaging consequences,” Justice Samuel Alito wrote in his opinion. “And far from bringing about a national settlement of the abortion issue, Roe and Casey have enflamed debate and deepened division.”

“It is time to heed the Constitution and return the issue of abortion to the people’s elected representatives,” Alito added.

The ruling also reversed Planned Parenthood v. Casey, the 1992 decision that reaffirmed Roe. The Casey decision had prohibited laws imposing an “undue burden” on a woman’s access to obtain an abortion.

Soon afterward, pro-abortion protesters began to gather in multiple cities, including Chicago, Los Angeles, New York, San Francisco, Seattle, and Washington. Some decided to take their protests outside of the homes of Republican-appointed Supreme Court justices.

The USCP also announced that it provided assistance to protesters.

“The USCP and our local partners worked together to bring in cooling buses & additional people to help demonstrators with heat issues. Roughly 12 people have been helped so far,” the police agency said.

On Friday, the USCP issued a warning after noticing that demonstrators had began gathering “on Capitol Grounds” near the Supreme Court.

“Protesters are allowed to peacefully demonstrate, however they must follow the officer’s instructions so that everyone stays safe,” the USCP wrote on Twitter.

Separately, Guido Reichstadter, a pro-choice activist who climbed to the top of the Frederick Douglass Memorial Bridge in Washington, D.C., is in police custody, the Metropolitan Police Department told WJLA. According to the police, he faces charges of unlawful entry, crowding, obstructing or incommoding, and failure to obey.

Reichstadter began climbing the bridge at around 10 a.m. on Friday, according to FOX 5 DC, bringing traffic to a halt as police tried to reach out to him.

He stayed on top of the bridge for more than a day before coming down on Saturday to be arrested. The bridge reopened at around 2 p.m. local time on June 25.

While he was atop the bridge, he took to Twitter to explain his action.

“I came to DC to organize civil resistance against the assault on abortion rights. I’m looking for folks who want to join in civil disobedience, as well as people who want to help organize & support,” he wrote.

The Supreme Court ruling has since drawn different reactions, particularly from the Democrats and Republicans.

“Today’s Supreme Court opinion will live in infamy as a step backward for women’s rights and human rights,” she wrote.

Former Vice President Mike Pence said that the Supreme Court has “righted a historic wrong” with its ruling.

“Today, Life Won. By overturning Roe v. Wade, the Supreme Court of the United States has given the American people a new beginning for life,” he wrote.

“By returning the question of abortion to the states and the people, this Supreme Court has righted a historic wrong, and reaffirmed to right of the American people to govern themselves at the state level in a manner consistent with their values and aspirations,” he added.