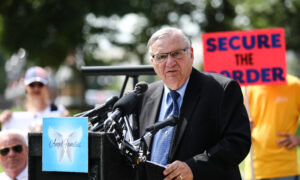 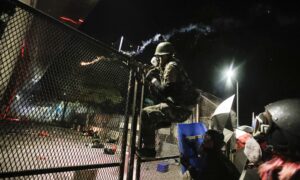 Clash at Pro-Police Rally in Colorado Leads to 3 Arrests

Three people were arrested and another was cited after fights broke out during a pro-police rally in Colorado over the weekend, authorities said.

Police supporters and counter protesters gathered in Fort Collins on Aug. 8. Some time later, “physical disturbances broke out between members of the different groups,” the Fort Collins Police Department said in a statement.

Video footage captured at the scene showed the groups facing off, shouting expletives at each other. The pro-police group appeared to be forcing the other group, which was clad in Antifa-like clothes, from a cul-de-sac.

“We are currently marching the Antifa commie [expletive] out of the neighborhood,” the man filming said.

At one point, about a dozen people started scuffling in a drainage ditch. One man carrying an American flag used it to stab a black-clad man, while others shouted that one of the counter-protesters was using a knife.

About 2 minutes later, police officers pulled up in cruisers and sprinted over; they made several arrests.

“It’s important to know that there were active aggressors on both sides,” Fort Collins Police Chief Jeff Swoboda said in a video statement.

It wasn’t clear which groups the demonstrators were affiliated with.

Some people who had been fighting left the scene before police arrived.

Police officials are reviewing video and working to identify those people. They asked the public to contact the department with any information.

“Truly supporting a cause means representing its values. Committing crimes in our community is not a way to support the police. We stand for safety, period. We want all of our community members to feel safe here in Fort Collins and we reject any form of hate,” he said.