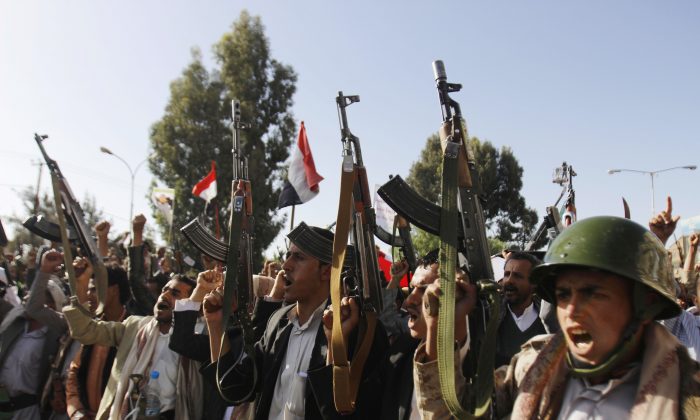 The short English-language statement on the Oman News Agency said only that the U.S. State Department had asked Oman to bring the Americans out of the country. It did not elaborate or provide information on the Americans’ identities.

However, independent security officials in Yemen and members of the Shiite rebels known as Houthis said the Americans had been detained for at least two months at a Houthi security building in the rebel-held capital of Sanaa.

The rebels and the officials, who spoke on condition of anonymity as they weren’t authorized to brief journalists, did not say why the Americans were held. Two of them were working with the United Nations, the officials said, while offering no information about the third.

The Houthis previously said they had detained two Americans on suspicion of being spies, but it wasn’t immediately clear if those two were included in the release.

Some foreigners have been held in recent months by fighters involved in the country’s ongoing civil war, either as political hostages or for ransom.

U.S. officials could not be immediately reached for comment.

The Oman News Agency quoted an unnamed Foreign Ministry official in its report as saying: “The three U.S. citizens were transported from Sanaa to Muscat onboard … one of the Royal Air Force of Oman aircrafts, after which they will return to their country.”

Yemen has been embroiled in fighting that pits the Iran-backed Houthis and forces loyal to a former president against the Saudi-backed and internationally recognized government. The Saudi-led coalition has been carrying out airstrikes against the rebels and their allies since March, fearful of Iranian influence spreading across the Arabian Peninsula.

Others fighting the Houthis include southern separatists, local militias and Sunni extremists like Yemen’s al-Qaida branch, considered by Washington to be the most dangerous offshoot of the terror network.