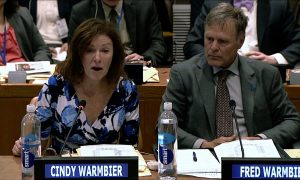 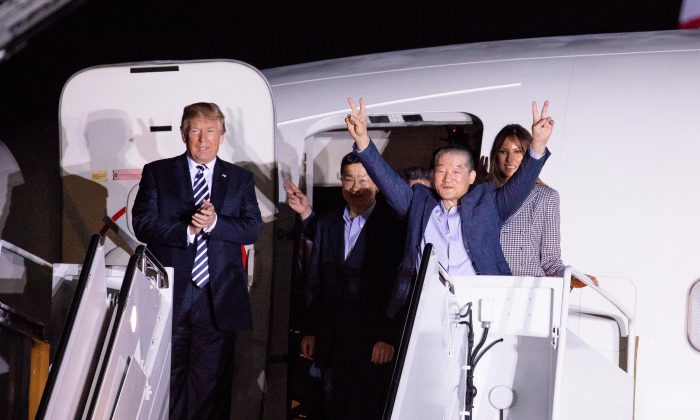 President Donald Trump greets the three Americans who arrived back in the United States after being imprisoned in North Korea, in Maryland, on May 10, 2018. (Samira Bouaou/The Epoch Times)
Trump Administration

WASHINGTON—Three Americans took their first breaths of freedom as they stepped off their plane in Maryland early Thursday morning.

The three, who had been imprisoned in North Korea, were greeted by President Donald Trump and First Lady Melania Trump on the tarmac at Andrews Air Force Base. Vice President Mike Pence and his wife, Karen Pence, also attended.

The weather was balmy and the mood festive as crowds gathered to witness the homecoming. A massive American flag, held up by two fire trucks with extended ladders, created the backdrop for a grandstand set up on the tarmac.

“The greatest achievement will be to denuclearize the whole [Korean] peninsula,” Trump said after he had met with the men on the plane before they disembarked. “We very much appreciate that [Kim] allowed them to go before the meeting. We have a very good chance of doing something meaningful.

“I think [Kim] did this … because he wants to bring his country into the real world,” Trump said. “We’ll see what happens. We’re talking about a few weeks.”

Secretary of State Mike Pompeo traveled back to the United States at the same time as the three men.

The men are Kim Dong-chul, Kim Sang-duk, and Kim Hak-song.

Kim Dong-chul had been in prison since October 2015. Kim Sang-duk and Kim Hak-song were arrested in April and May last year, respectively.

The families of the returnees are not at the airport, according to the White House.

One of the men said being home again “was like a dream, and we’re very, very happy.”

One of the men was asked how he was treated in North Korea.

“We were treated in many different ways. For me, I had to do a lot of labor, but when I got sick, I was also treated by them,” he said.

After arriving and meeting with the president, the returnees were taken by bus to Walter Reed National Military Medical Center for further evaluation and medical treatment. The White House is referring any questions about their medical condition to the State Department.

Trump said on Twitter on May 9 that the date and time had been set for the talks between him and North Korean leader Kim Jong Un. Trump said he will reveal the details of the meeting sometime in the next few days, but that it won’t take place in the demilitarized zone between the two Koreas.

The release and return of the detainees is another major concession by Kim Jong Un ahead of the upcoming meeting with Trump. Kim has already agreed to complete denuclearization and peace with South Korea at a summit between the two countries in April.