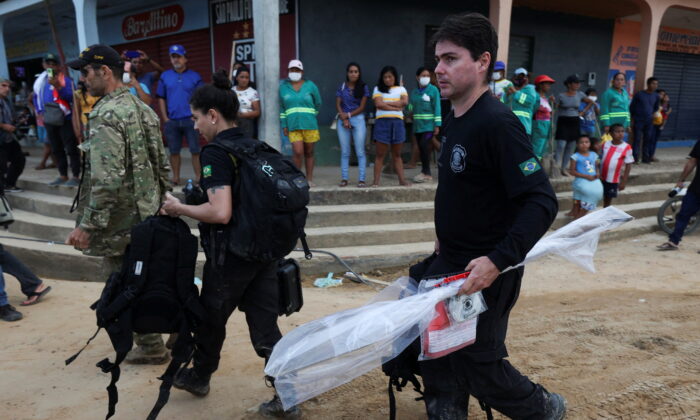 Federal Policemen carry seized material during a search operation for British journalist Dom Phillips and indigenous expert Bruno Pereira, who went missing while reporting in a remote and lawless part of the Amazon rainforest, near the border with Peru, in Atalaia do Norte, Amazonas state, Brazil, on June 14, 2022. (Bruno Kelly/PA Media)
UK

Brazil’s federal police on Tuesday arrested a second suspect during its investigation into the disappearance of British journalist Dom Phillips and indigenous adviser Bruno Pereira in a remote area in the Amazon forest.

Amarido, also a 41-year-old fisherman, was arrested on June 8 on a weapons charge. His family and lawyers have denied that he had any role in Phillips and Pereira’s disappearance.

Oseney told The Associated Press on Friday that he had visited Amarido and was told Amarido had been tortured on his boat by local police.

Speaking to reporters on Tuesday, police investigator Alex Perez said Oseney had been arrested “on suspicion of homicide based on witness accounts that placed the two suspects at the supposed scene of the crime.”

Phillips, a freelancer who has written for the Guardian, the Washington Post, and other publications; and Pereira, former head of isolated and recently contacted tribes at the government’s indigenous affairs agency Funai, were last seen on June 5 when the pair was on a research trip for a book Phillips had been working on.

Some belongings of the men, including Pereira’s ID card and a backpack containing clothes and a laptop, were found near where they were last seen, but police have yet to find the men or their bodies.

Urged to prioritise the case by former Prime Minister Theresa May, who represents the area where Phillips’ niece Dominique Davis lives, Prime Minister Boris Johnson said on Wednesday that the British Foreign Office officials are “working closely” with the Brazilian authorities.

“The minister responsible has raised the issue repeatedly, the search and rescue efforts with Brazil’s justice and public security minister, and what we told the Brazilians is we stand ready to provide all the support that they may need,” Johnson told Parliament.

Brazilian ambassador to the UK Fred Arruda earlier apologised to Phillips’ family for having relayed incorrect reports that Phillips’ body had been found.

“We are deeply sorry the embassy passed on to the family yesterday information that did not prove correct,” Arruda wrote in a letter, adding that the embassy had been “misled” by information it had received from “investigating officials.”

“The search operation will go on, with no efforts being spared,” the letter reads.

On Saturday, separate reports emerged that police had discovered human matter in the Itaquai River, near Atalaia do Norte’s port.

Authorities previously said blood found on Pelado’s boat had been sent for analysis.